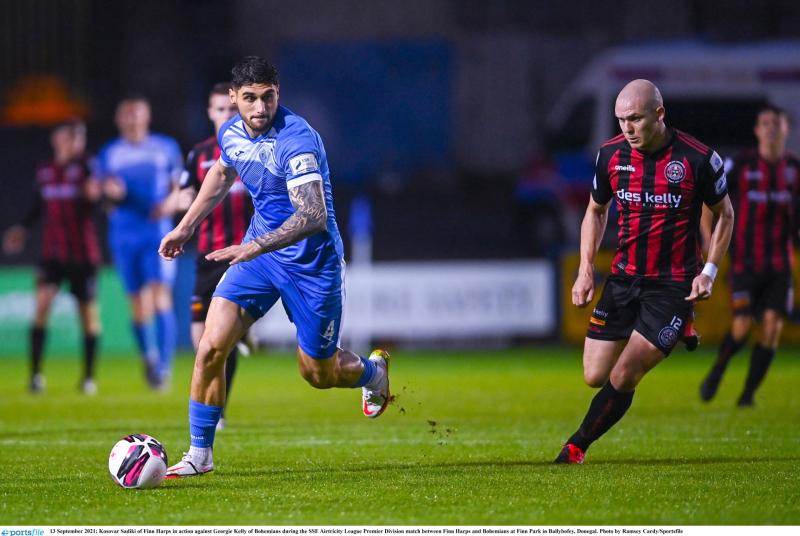 Bohemians ran out winners against Finn Harps in Ballybofey on Monday night when the opening goal caused quite a stir - as did a late incident when they might’ve scraped a point.

Thirty-two minutes in, Promise Omochere glanced the visitors in front in controversial circumstances. Harps midfielder Will Seymore was caught by a high foot in his own penalty as he tried to clear from a corner and went down.

Referee Paul McLaughlin waved play on and with Seymore initially playing the visitors onside, play continued and a Georgie Kelly’s shot was saved by Gerard Doherty and from the follow-up Ali Cooke’s stab at goal was cleared off the line by Shane McEleney.

Omochere, looking suspiciously offside, glanced home Keith Buckley’s ball back in and McLaughlin pointed towards the centre circle. Harps were incensed and Seymore hobbled off the field to be replaced by Mark Coyle.

Then, four minutes before the break, one of Donegal’s own, Kelly, stepped up to score his 14th league goal of the season when he planted a penalty past Doherty for 2-0 after Kosovar Sadiki clipped Ross Tierney.

Ryan Rainey would pull one back for the hosts some 10 minutes from time when he stooped to head home a Dave Webster cross down low at the near post and set up a grandstand finale.

Seymore has been in impressive form of late and on 19 minutes warmed the hands of Brian Talbot. Bohemians didn’t initially test Doherty - in for the suspended Mark Anthony McGinley - although Liam Burt’s tidy touches were a cause for concern for the hosts.

Doherty was called into action when substitute Omochere outpaced the Harps backline to get onto a pass from Kelly only to shoot straight at the former Derry City goalkeeper.

Karl O’Sullivan, from a Rainey cross, was only a matter of yards out only to see Anto Breslin block his first attempt and Talbot saved the second 26 minutes in.

Bohemians missed a similarly promising opportunity four minutes later when right-back Andy Lyons’ crisply-struck flew back off the base of the post and Doherty stopped the rebound effort from Omochere.

After going one and then two down, Harps peppered some inviting deliveries into the Bohemians penalty area late in the half from O’Sullivan in particular. Webster forced a save from James Talbot from a daisy-cutting Barry McNamee corner.

Sean Boyd was narrowly off target with a glancing header from a McNamee free-kick just shy of the hour, while Tierney, at the other end, volleyed a Dawson Devoy into the ground and it spun over Doherty’s crossbar. Omochere, in search of goal number three, smashed into the side-netting moments before Rainey, for Harps, did likewise with a header.

Ten minutes from time, Rainey pulled one back to bring Finn Park to life. They gave Bohemians plenty of awkward moments late on, including a Kosovar Sadiki header that was cleared off the line in injury time with Doherty up in the opposing box amid claims for both handball against Devoy and whether it might’ve crossed the line. Both fell on deaf ears.