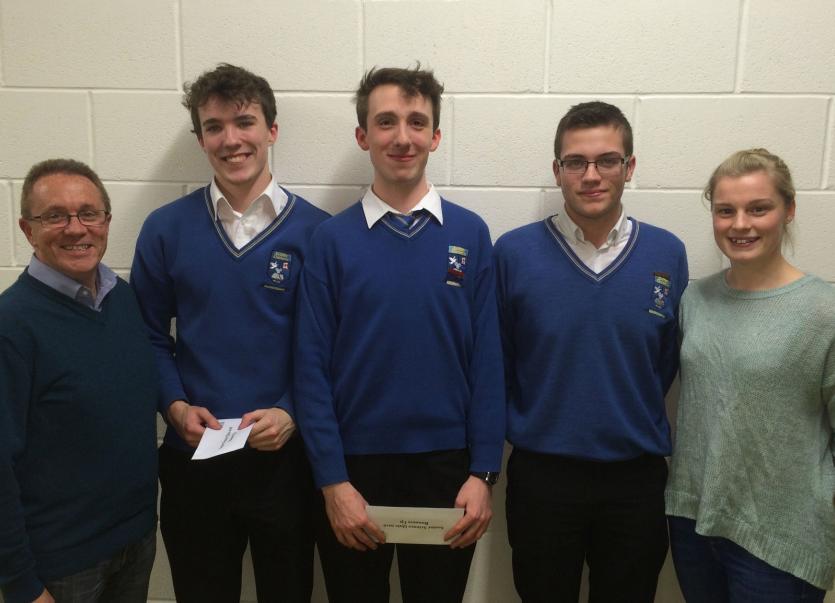 The CCBS Science Team made it to the final of the National Science Quiz last weekend in Dublin.

Congratulations to Jonathan O’Brien (Leaving Cert 2016) on receiving two top awards at the UCD last week, the UCD Entrance Scholar award and the Bord na Gaeilge Award. UCD recognises the calibre of its incoming high-achieving students with the award of UCD Entrance Scholar, presented to first year students who achieve 560 points or more in their Leaving Certificate (or equivalent second level examination) in recognition of their academic accomplishment to date. The Bord na Gaeilge Irish Language Student Residence scheme aims to strengthen the use of the language on campus by providing students with the opportunity to live on campus in ‘Teach na Gaeilge’, while developing their individual talents through a range of social and cultural activities. Miss Fagan attended the ceremony in the O’Reilly Hall, UCD, on November 17th. Jonathan was an exemplary student throughout his career at Coláiste Cholmcille, and we are delighted to see that his hard work has received recognition at such a prestigious occasion. 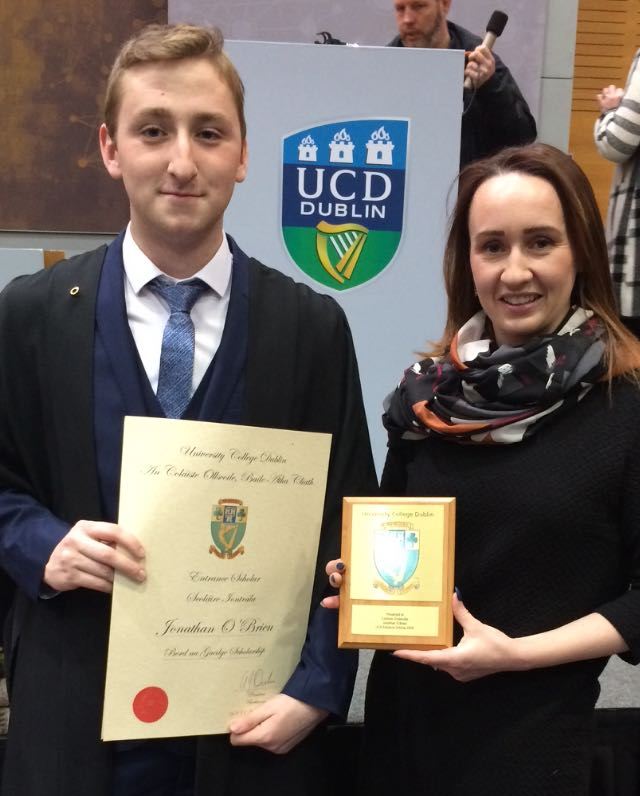 Jonathan O’Brien and Miss Fagan with his awards at UCD

The U19 Girls Basketball team have qualified for the North West Region A final playoffs on December 6th against Ursuline College, Sligo. They defeated Loretto Letterkenny recently with a final score of 42-27.Top scorers on the day were Tara Duffy, Emma Rooney, Saoirse McDevitt and Andrea McGlynn.

The U16s were defeated by Loreto Letterkenny recently but despite not qualifying there were some impressive performances from Ana Keon, Andrea McGlynn, Brigin Maguire, Caoimhe Keon and Siofra Hughes.

Congratulations to Team 1.2 on winning the First Year Futsal Championship, after 7 weeks of exhilarating action. The game certainly lived up to its billing and it was a game of close margins. When the final whistle went, there were great scenes of celebration from the players and supporters of 1.2. It was an excellent end to a fantastic tournament. Mr McGlynn presented the trophy to 1.2's captain John Roper and there was a medal for every player, manager and tutor involved in the final. Special thanks must go to the Transition Year students who turned up twice a week to referee the matches, manage their teams and assist Mr Doherty in ensuring the competition ran smoothly: Cianán Roper, Tiernan McCrea, Jack McSherry, Iarlaith Keegan, Dylan Clancy and Kajus Skablauskas.

Our U20 Girls Gaelic team topped their group with a win over PCC Falcarragh on Wednesday on a scoreline of 4.07 to 3.0. They now go on to face Loreto, Cavan in the Ulster semi-final in the coming weeks. Venue to be confirmed.

The U16 Boys GAA team has had a very successful run in their section in Donegal this year and progressed to the quarter-final stage of the Arthur’s Cup Competition in Ulster. They faced St Joseph’s of Donaghmore last Wednesday and sadly lost by a point. The final score was 1:10 to 0:12.

A group of 22 First Years took part in this year's indoor athletics competition which took place on Tuesday in the AVS, Donegal Town. The students competed in a number of different track, field and relay events with both the boys and the girls placing 3rd overall. Well done to all students that took part.

This week, as part of College Awareness Week, the Leaving Cert students had a guest speaker from Sligo IT. Details on all aspects of the IT were offered by a very capable student ambassador Áine McGroary. The week ended with a trip to Letterkenny IT for all senior students. Coupled with the information session last week, all Leaving Cert students are encouraged to apply for their CAO number in the coming weeks. Exciting times ahead!

Mass for all deceased relatives and friends on Monday on the stage. Mass was celebrated by Fr. O Fearrai with a good attendance of staff and students.

Well done to class 3.4 who raised €500 for the Jack and Jill Children's Foundation. The class raised much needed funds for this very worthwhile charity by organising a Halloween Disco for the First Years and a Civvies day before the mid-term break. Thank you to David O'Donnell from Spar in Ballyshannon who sponsored the shop the students set up at the disco. Mr Jonathan Irwin, founder of the Jack and Jill Children's Foundation, visited our school to receive the cheque and tell students his story and motivation for setting up the charity. Students also learned about the invaluable work that Jack and Jill do for "their babies" and where the money they raised will go.

Transition Year students are busy organising a TY Christmas Fair as a fundraiser for the Make A Wish Foundation. The CCBS Christmas Fair will take place on December 9th in the Mercy Hall from 10am to 4pm. A range of products produced by TY students will be available: Christmas baubles, logs, crafts, cakes, muffins, buns, brownies and cookies, to name but a few. Other local producers will also be invited to participate. This is the first time that such a large-scale project has been developed by the TY Enterprise team, and we wish them the best of luck! Visit the Facebook page for updates: search Coláiste Cholmcille Christmas Fair, and add us on Snapchat: xmasfair-ccbs.