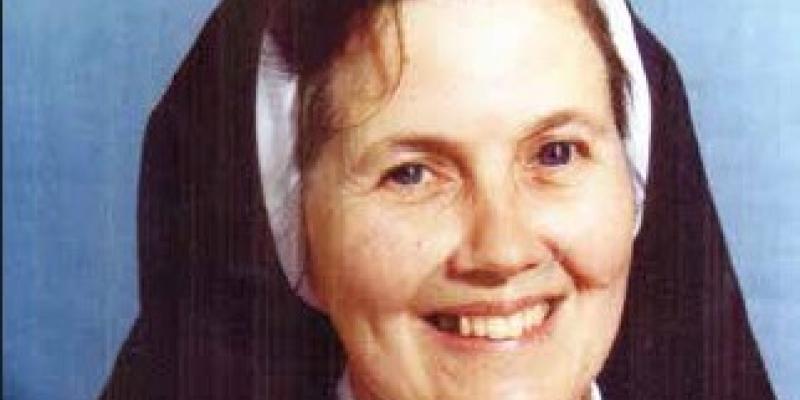 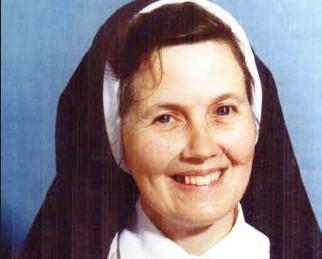 She was the fourth of nine children, and her father was a small farmer on marginal land near the Ben Gorms cliffs.

He kept a few cows, some sheep and two horses for farm work and cut turf on the nearby hill for themselves and for sale.

They lived in a traditional two roomed thatched cottage. Brigid’s mother, Celia, looked after the house and the children – baking, churning, knitting and spinning their own wool. Celia and Brigid’s older sisters crocheted lace – gloves and trimmings for soutanes and altar cloths.

Brigid went to Urblereagh National School when she was six, a walk of three miles from her home. It was a three-teacher school and lessons were mostly through Irish.

Religion played a natural part in their lives, both at school and at home, from the family Rosary at night and the making of St Brigid’s crosses, to the trip in the jaunting car to Lagg Church on Sunday mornings for Mass.

Brigid enjoyed school and had a happy childhood with her siblings, until her older sister, Sadie died after a year’s illness, when she was aged 18 and Brigid 14. On completing her Primary Certificate, her teacher, Master Jimmy Doherty (Jack), gave her special lessons after school so that she could sit the Civil Service entrants exam, which she duly passed.

Brigid wanted to work in Donegal and, as there was only one Civil Service position available in the county that year, which she didn’t get, she went to work in Malin Head Post Office in 1947, where she quickly became one of the family. She then worked in Culdaff Post Office from 1950 to 1954.

As a young woman, Brigid had many friends and enjoyed socialising and dancing like all the other young people her age, and had several boyfriends.

Sr Teresa began her working career in a secretarial capacity in Our Lady’s Grammar School, Newry. Although she wrote home regularly and her family visited her on occasion, she was not allowed home from the convent until 1962, prior to leaving for Alabama. Then, she and Sr Perpetua spent a week in the Glen and borrowed John’s precious Morris Minor to attend daily mass in Malin Head.

Later in 1962, she joined the Sisters of Mercy Foundation at St Dominic’s Parish, Mobile, Alabama, USA. There she completed her teacher training and taught in St Dominic’s school, Mobile, until she came back to Ireland in 1971.

On her return to Newry, Sr Teresa re-trained for her new role, in Religious Formation. She became Novice Mistress in the Catherine Street Convent in 1972, as well as teaching full-time in the Primary School in Bessbrook, Warrenpoint, and then in St Joseph’s Convent Primary School, in Newry, adjacent to the Convent. She now could visit home regularly. She got to know her siblings again and her many nieces and nephews, to whom she became Auntie Brigid, Sr Brigid or even just ‘the Nun’. She delighted in attending various family functions and her brother, John often remarked that the convent had taught her to sing!

She kept up-to-date on news relating to family, relations and neighbours, and anyone who was sitting exams, or sick, or had bother in their lives, were always included in her prayers.

She retired from teaching in June 1994, after 20 years as an educator.

However, Sr Teresa may have reached ‘retirement age’, but she wasn’t for retiring.

In 1996, at the age of 67, she took on yet another new venture and headed to the Mercy mission in Minna, Nigeria, West Africa, which was established in 1975 by the Mercy Sisters from Strabane.

For Sr Teresa, it was a new culture, a new language, and a new and harsh climate. She wrote home as often as she could and described her living and working conditions in Nigeria.

She always asked after all the family at home and requested everyone to keep up their prayers for her work in Maikunkele.

She continued to teach, but this time it was young women, who in turn would become the class teachers in a fledgling nursery/primary school, which was founded three years earlier. Her family and community backing, both spiritual and monetary, during this time was so precious to her. She often spoke of the enormous support she had from ‘home’ and that was Malin Head. She loved her family, and nothing gave her more joy than heading off to Donegal at any opportunity, home to her sisters and her brother, John, who was the light of her life.

In Maikunkele, Nigeria, Sr Teresa is still held in high esteem. She is remembered for her great wisdom, care, and compassion. She instilled in the young women the love of teaching, and many of her teachers are still at the school, now mothers themselves and taking their own children to school.

She was known as ‘Kaka’, a term of endearment, meaning the Elder, the wise one, the Grandmother to all. Sr Teresa returned to Newry in 2005, still not ready to retire.

When the need arose, she stepped in to bring the Blessed Sacrament to the residents of Our Mother of Mercy Home, on the other side of the town.

Sr Teresa was a woman of great faith and outstanding courage and trust in her God, and a very independent lady. Her commitment to her ministry was only second to her desire to be in the presence of the Blessed Sacrament.

Throughout her life she spent long hours in the convent chapel. Her prayer life was paramount and daily Mass, when possible, was the centre of her day. She had special devotion to the Little Flower. Her motto in religious life was ‘To Jesus through Mary’.

Sr Teresa died on January 29, 2022, aged 93 years and, after a touching funeral Mass in the convent chapel in Newry, she was buried in her beloved Lagg, Malin Head, Co Donegal, with her parents and her brother, John, on St Brigid’s Day.