New UK MP is a son of Donegal parents

One of the UK's newest MPs has strong Donegal connections.

Dave Doogan was elected as MP for the Angus constituency in eastern Scotland in the early hours of this (Friday) morning.

A former aircraft engineer, his father Jim Doogan had strong Rosses connections and and his mother Annie Doogan (neé Walsh) of Ardveen.

On a night when Boris Johnson's Conservative Party was sweeping into power with a massive majority, Doogan recorded a great success for the SNP as he took the Angus seat by defeating the incumbent conservative candidate Kirstene Hair.

Doogan has served as a councillor on Angus District Council for the past eight years.

The Liberal Democrat candidate Ben Lawrie was a distant third with 2,482 votes while Labour's Monique Miller was fourth with 2,051 votes. 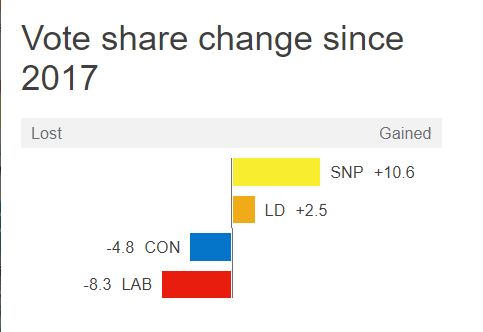 According to the Exit Poll released after polling stations closed, the SNP was on course to win 55 of the 59 seats in Scotland.

At 3.00 am, in a revised BBC forecast, the Conservatives were on course for a majority in the region of 64 seats.