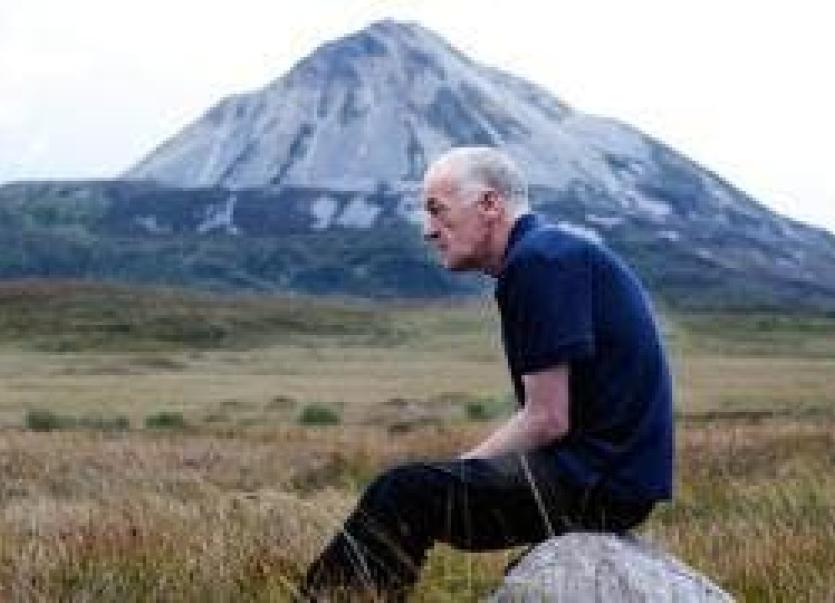 Poet and author John O’Donnell Cotter was born in Cork and brought to live in Churchilll with his adopted parents in Donegal when he was a baby.
It was at national school that John first found he had an inclination to write.
He liked to sit in the class writing poetry on his copybook at every opportunity.
The art was mostly discouraged by teachers who preferred that John focused on the subject at hand.
So, setting his pencil and copybook aside John folded his arms, sat upright and stared ahead at the blackboard and listened to what was being taught.
It was years later he returned to his first love which is writing poetry.

Thousands of poems
His new book ‘The Wild Atlantic Poet’ is one that includes work that he has been working on for many long years. Over the past decade John has began to focus in earnest on his writing with diligence and determination. The poems that are printed in this first edition have been chosen from thousands of other poems that he has compiled over the years.
John has written poetry often and encapsulated moments in time whether it is listening to the pitter-patter of the rain against the window or casting a stone into the wild Atlantic ocean from a Donegal beach.

Creative arts
John has lived in Donegal most his life and has enjoyed working in many different trades. John has been an adept hand at different professions but has always found that his mind came back to the creative arts - to his love of music and writing.

The subject matter of his poetry is wide and varied from beautiful descriptive poetry about fairies in Fintown, to walking along Port Arthur beach. There are light-hearted poems in this compilation, as well. Some poetry about the simple and ordinary will make you smile.
In one of his poems, John writes about the trials and tribulations of catching an annoying fly which annoys him. He chases the fly around the house until he catches it but there is a twist in his poem - it is not a simple conclusion.
Other poems are darker and deal with the emotive issues and relevant subject matters of addiction and homelessness.

Survival
The first poem in the book is named ‘The fight for Survival,’ and begins ‘Put down the pills and listen to me, No matter the past, You need to be free, Put down that drink, Stop trying to drown, Come talk to me, I will help your when you are down.”
In much of his poetry - you will hear John invite people who are hurting to come and talk to him.
In other poetry, John explores the issue of homelessness and how people walk past those who are homeless on the side of the street without seeing them lying on the pavement. He says that the government doesn’t want to deal with the issue.
“Living on the streets in Ireland, There are homeless wherever we go, Their sad faces as they curl up at night, Another statistic the government don’t want to know.”

John describes the plight of the homeless with feeling and depth using imagery of people in cardboard boxes and blankets curling into shop fronts.
You will also find poetry John was commissioned to write within this compilation.

“A lot of the poems that I have written have been turned into songs.
I would have over a hundred songs written.
“Some of them have been recorded in America, some of them are recorded in Switzerland, Italy and of course Ireland as well,” he said.
John enjoys traveling and earlier this year he spent a number of months in the Netherlands. He enjoyed the experience immensely. He says that he would very much like to return to the countryside where he enjoyed to write and listen to music.
On another occasion, John was fortunate to spend nine months in the Tyrone Guthrie Centre in Monaghan. It took John a while to become accustomed to it but after a while he settled in and began and really enjoy the experience.

Daniel - his father
The book is dedicated to his parents whom he learnt of later in life.
John was adopted by parents in Donegal and it was later in life, entirely by his own investigative means, that he finally came to learn of his biological parents.

One of the opening page on his book pays a loving tribute to his parents and reads: “Dedicated to my late father Daniel and mother Sarah, sadly no longer with us; they are gone to their rewards. Eternal rest granted to them both.”
A moving poem about his father reads: “Although I may not hear his voice, I hear him in my mind,
And when I seem to have lost my way, He pushes me from behind.

The picture on the front of the book is a book of Bád Eddie which has been kindly reproduced with the permission of Pat Cook photography.
The photograph on the back of the book depicts John sitting in front of the Errigal mountain and was taken by Kim Haughton for the Guardian newspaper.

Politics
Having a sharp and inquiring mind it will come as no surprise to those who know him that John has written poems about Irish politics and the legal system.
Some of these poems include ‘Puppets on a String,’ ‘The times we live in 2018’ and ‘Ireland 2019.’
His frustration at the system and the manner in which is run is very apparent in these poems.
Some of his poems depict a moment in time - record an occasion which people can recall through his record.
His poetry is open and honest and is written with heartfelt sincerity.

Information
The book will be sold in all good book shops over the course of the coming days.
“The books will be for sale in local shops in the coming days and weeks,” he said.
The book only recently arrived with John and will be distributed shortly. The book is already for sale in Eurosaver in Donegal town.
John said that he is more than happy to send people the book if they contact him on his social media platforms.
“I am happy to help anyone who wants to get a book. If they contact me I will be more than happy to help,” he said.
You can also email John directly at jodonnell4963@hotmail.com.
You can buy the printed version for €12.99 and the online version for a €5. There is a link on John’s Facebook that people can also avail of.
The Derrybeg-based author asked people who have an interest in his work to keep updated on his Facebook site where they can also contact him.