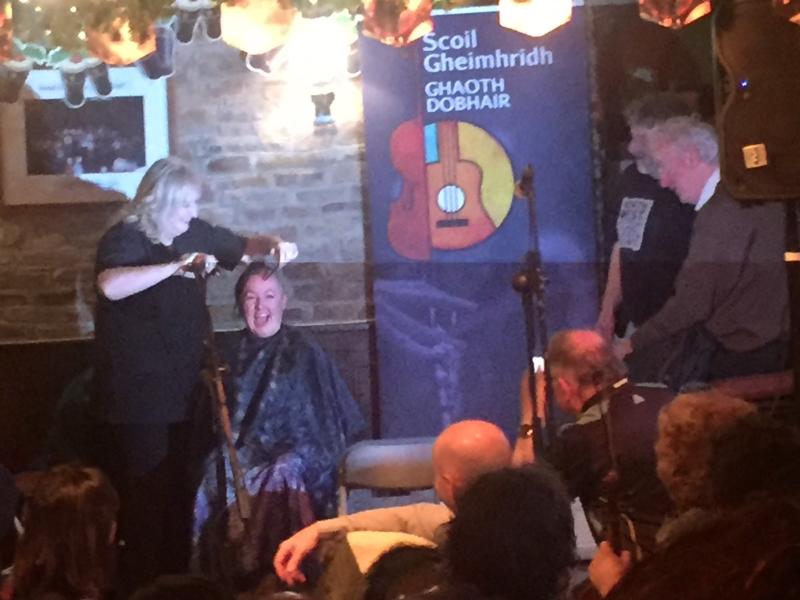 Three brave women, well respected fiddlers, Bríd Harper from Castelfinn and Tara Connaghan from Glenties and her aunt Eileen Hegarty from Ardara all got their heads shaved to raise money for St. Colmcille's Hostel in Letterkenny.

The event was part of the wonderful musical tradition, Scoil Gheimhridh Ghaoth Dobhair which is an annual event in Gaoth Dobhair.

The MC for the occasion was well known fiddler and journalist, Martin McGinley. He took to the stage and announced that there was a "dramatic incident," a traffic jam in Gaoth Dobhair, and that a bus outside the well known Bunbeg establishment could not get through.

There was great fun and laughter at the well known Donegal pub where traffic jams seldom take place.

To date, €2,633 has been raised for the hostel in Letterkenny which provides hope and accommodation for those who are in dire need of a helping hand. The final total is not known, as yet.

Eileen Hegarty was the first to have her head shaved followed by Tara and Bríd.

Tara said that the three ladies had put their heads together and decided to raise money for the Letterkenny hostel which provides help for so many people.

Following the event, Martin McGinley announced that there would be plenty of hairdryers for sale much to the amusement of those gathered.

Later and on a more emotive note, Mary Maguire told the ladies of her appreciation and outlined the vital work that she and her husband do for those that they provide housing for.

More in the Donegal Democrat on Thursday.