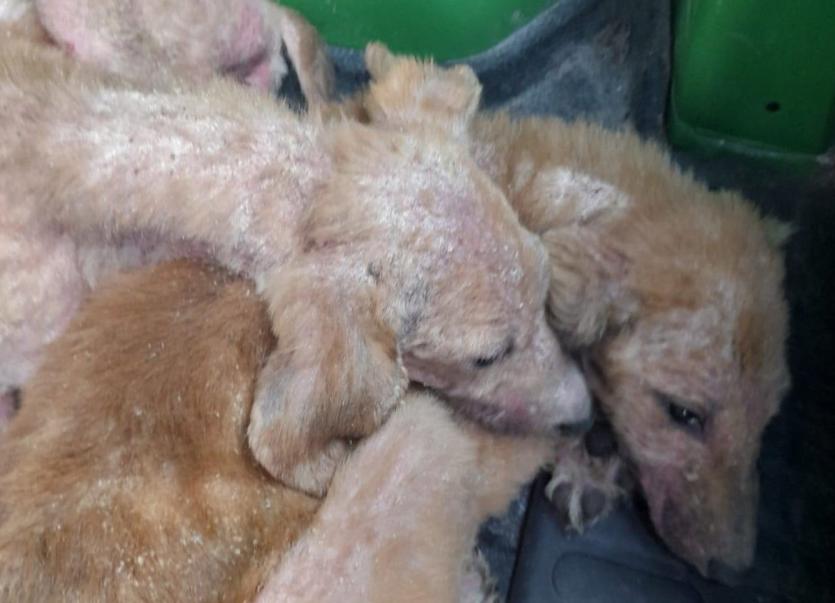 Animals In Need (AIN) responded to an appeal for help with two Lurcher pups who were found abandoned in very poor condition in County Clare.

The three-month-old female pups were discovered by members of the public who brought them to the local Dog Shelter and from there they were rushed to the vets for emergency treatment.

The pups were riddled with worms, seriously underweight and suffering from fleas and mange.

They were then transported to Donegal into the expert care of AIN’s volunteer Ann, who bathed their sore skin with medicated dog shampoo and is treating them for the various parasites afflicting them.

Their skin was raw and one of the pup’s paws was bleeding and painful.

The Lurcher sisters have a long road ahead of them until they are fully recovered, months rather than weeks, but they are safe and warm now.

Many thanks to everyone who contributed to this coordinated rescue, from County Clare to Donegal.

The pups were unlikely to have survived another night out in the cold in their condition, so well done to all involved.

After a quiet start to the year, dogs are now regularly being surrendered to the charity or being left in the Letterkenny Pound, nearly all of them collies.

AIN collects all the dogs from the Pound every week, once they have spent the mandatory five days there without being claimed by their owners and the numbers needing rescue have started to rise.

Meanwhile, the cat rescuers have been kept busy carrying out TNR (Trap/Neuter/Return) of feral cat colonies and helping a number of sick cats who have been found around the county.

Little Avaline, a four-week-old kitten, was found alone, cold, dehydrated and blinded by infection at the weekend.

Hopefully she will respond to treatment for her infected eyes but for now she is happy to be sleeping on a heat pad at the cattery with a full belly.

A battered looking adult cat also arrived at the weekend. He has obviously been through the wars in his time, but all his breaks and scars are old, so with time and care it is hoped that he will improve.

A colony of feral cats in Bruckless have been neutered and have been released back to their carer where they are doing well and the problem of overbreeding has been resolved.

The volunteers were called out to help a 5-month-old feral kitten in Buncrana as she appeared to be pregnant.

This young cat turned out to be very friendly but it soon became clear that there was something wrong with her stomach as it was rock hard and distended.

A trip to the vets revealed that she was blocked by constipation and when she did go to the toilet, she was passing plastic as she had been scavenging through hunger and had eaten the wrong things.

After several enemas, the blockage passed and she is now doing well.

Finally, the AIN volunteers are still awaiting the birth of the guinea pig babies.

Her owners had believed that they had purchased two male guinea pigs from a pet store, but later found that one was a female when she became pregnant.

The five-month-old, pregnant guinea pig is staying at AIN to have her babies. She is getting very big around the middle so she should give birth any day now.

For now, she is happily eating and relaxing in her foster home.