Was it a dream, did Ireland really beat the All Blacks? 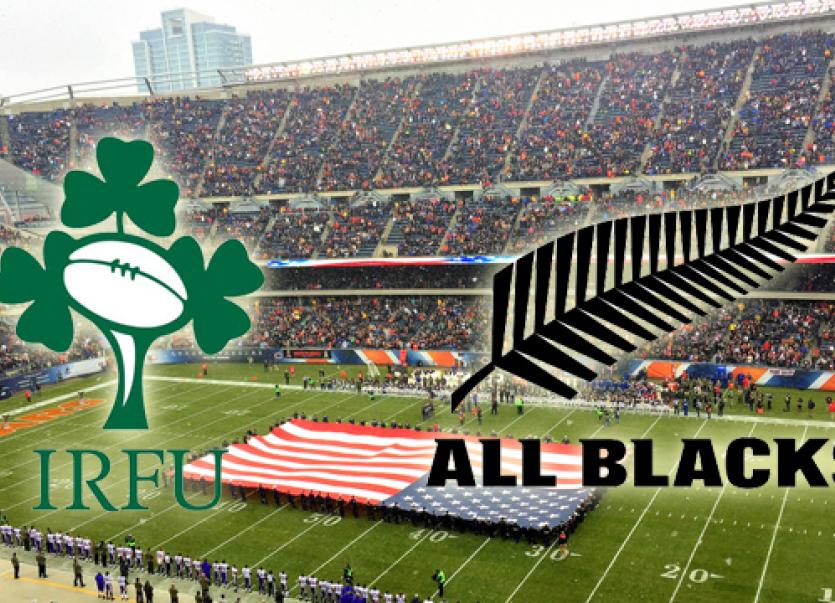 At about half past nine last Saturday evening I had a weird dream that Ireland’s senior rugby team beat the ‘unbeatable’ New Zealand’s ‘All Blacks’ in a bone crunching game played at Chicago’s ‘Soldier Field’ football grounds.

I can still in my mind vividly read the scoreline, Ireland 40 – New Zealand 29. Ireland have not beaten the ‘All Blacks’ since 1905 which made this historic victory all the sweeter.

‘Soldiers Field’ has a capacity for 51,500 fans, and it is reckoned on Saturday 5th November, that 50,000 of the fans were Irish or of Irish descent. Pre-game, the team stood in formation resembling the number eight, a nice tribute to the late Anthony Foley, Munster coach and also former No. 8 Irish International.

I bet that former Ramelton exile Dave Gallagher, who in the early 1900’s is credited as the ‘All Blacks’ first captain, is at this moment spinning in his grave with pride and excitement. Still, Saturday was only a dream- I think!

Busy three days last week. In Dublin for a wedding on Wednesday and Cavan on Friday. On Thursday I visited the ‘GPO Witness History Museum’. This new permanent attraction is located in the historical and iconic General Post Office building on O’Connell Street.

As we know the GPO, in the heart of Dublin City, was the communications hub of Ireland and centre of events during the 1916 Easter Rising, and on whose front pavement Pearse read the ‘Irish Proclamation’. These events were the catalyst for the foundation of the democratic Irish State.

The museum’s  highly interactive and spectacular visitor attraction focuses on  the Rising, the aftermath of this rebellion and how Ireland has developed since. From film, photos and sound you can experience the events unfolding from an eyewitness perspective of active participants on both sides and bystanders caught up in the event.

Thanks to electronic touch screens and computerised audio visual you can also experience the dramas unfolding inside both the GPO and British HQ. Actors portraying Pearse,Clarke,Connolly, Winnie Carney, Maxwell etc., as the battle raged. Also on display, ‘Memory Walls’ and ‘A Tale of Two Irelands in the early 1900’s’ – from Belfast to Dublin’. Up until 1962 the GPO basement was used by RTÉ to transmit its radio offering. Anyone remember every Saturday afternoon,‘If You Do Feel Like Singing, Do Sing An Irish Song’, sponsored by Walton’s Music Store?

For those interested in our country’s history and how Michael Collins (1890 – 1922) spent his ‘underground’ time in Dublin, then the recently launched ‘Walking Tour’ is also a ‘must do’. He is regarded as one of the most charismatic and popular leaders to emerge during the struggle for Irish freedom in the early 20th century. Considered one of the greatest exponents of guerrilla warfare, died at an assassin’s hand at the young age of 31.This tour examines the intricacies of the aftermath of the ‘Easter Rising’, the hated ‘Black and Tans’, the ‘Treaty Negotiations’, the ‘Irish Civil War’ and the assassination of Collins in his native Cork.

The Irish Postal System was founded in the mid 1600’s thanks to Evan Vaughan and Oliver Cromwell who established Post Roads. Over the centuries it flourished, a Head Post Office in the larger county towns, with a sub post office in every small village and also certain townlands.

In Donegal the three Head Offices, Donegal Town with 42 sub offices, Bundoran the most southern, Letterkenny the same number with Tory Island the most westerly and Lifford with Malin the most northerly.

Sadly a collapse of the country’s post office network is imminent with almost 500 Sub Post Offices having to close unless Government investment is forthcoming. Results from a submission to yesterday’s Oireachtas Committee hearing are eagerly awaited.