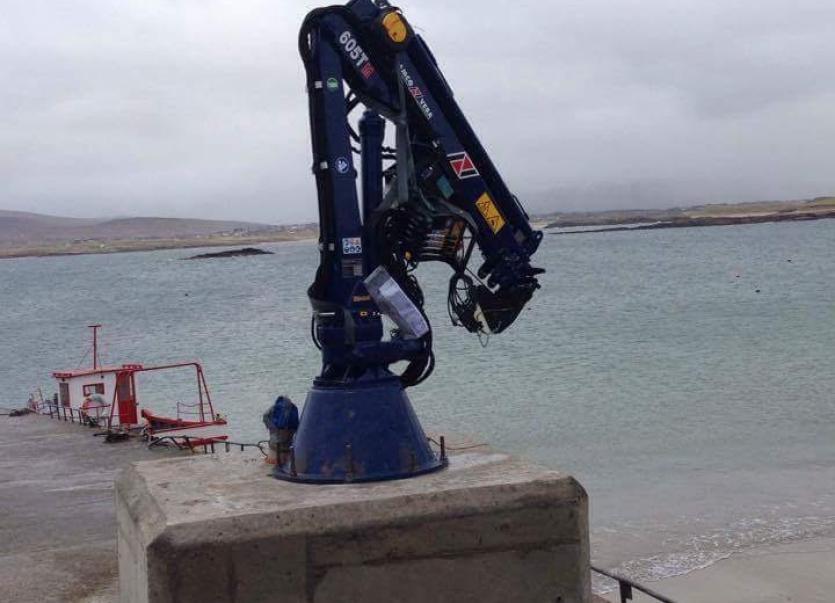 The crane at Gola Island.

A long-awaited crane has been erected on Gola Island, off the Gaoth Dobhair coast.

Mairín Uí Fhearraigh, bainisteoir of Comharchumann na nOileán Bheag Teo., said quite a lot of building work has been done on the island over the past 10 to 20 years. To date the heavy lifting from boats has been carried out manually, so the crane "will take a lot of the back-breaking work out of the lifting on the pier", she said.

"It's a very positive thing," Ms Uí Fhearraigh, a native of Gola, said.

Independent Cllr. Micheál Cholm Mac Giolla Easbuig said it was encouraging to see the new crane erected on the island. Cllr. Mac Giolla Easbuig, who had been working with local people and council officials to secure funding for the crane, said it will be, "a massive benefit to the local fishermen and others who use the pier. Our islands and coastal communities need this type of development if they are to thrive".

The Glenties Municipal District councillor said he has also been working with communities in Rosbeg and Magheroarty to provide cranes.

Ms Uí Fhearraigh said there is some building taking place on the island over the winter, with a few projects in the pipeline for summer. The island sees many visitors arriving each year after St. Patrick's Day, particularly climbers and walkers.