Donegal farmer shocked after finding snake on his land

Was checking cattle when reptile found 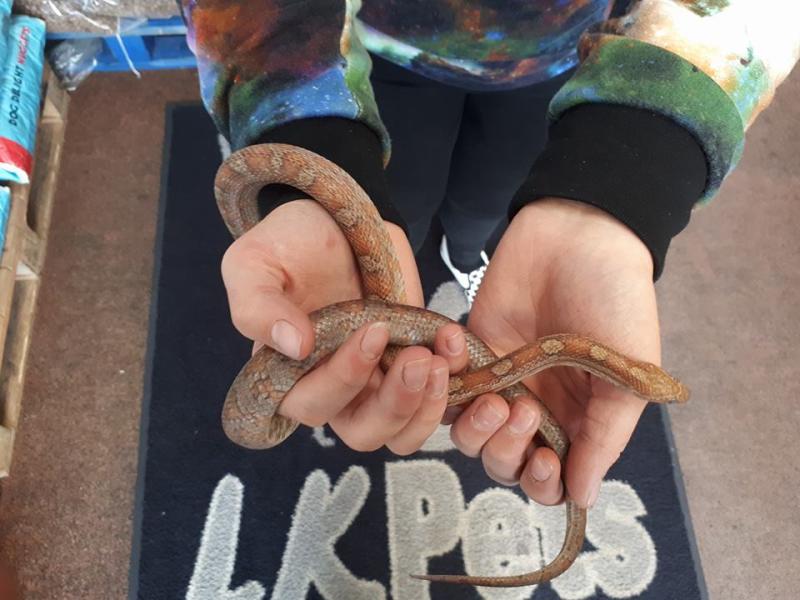 A Milford farmer got a surprise when he went to check on his animals yesterday and found a snake curled up resting on his land.
He initially thought it was a bit of pipe sticking out of the ground, but got quite a shock when he looked closer and saw the head of the reptile.
“It is not everyday you here of a snake being found in Donegal,” laughed Emma Curran of LK Pets in Letterkenny, who came to the rescue of the stricken snake.
Emma explained that the American Corn Snake was most likely an escaped pet and was very young.
She said the farmer’s wife called them after she initially rang around their neighbors to see if they could trace the owner, but to no avail.
The farmer stored the snake in an animal feedback until the experts arrived.
“It was curled up in a wee pile in the grass. It had got very cold and they stop moving when they get cold and that must have been as far as he could get. If the man hadn’t found him he would have died,” she explained.
Emma, who works along with her dad, Bryan Curran at LK Pets in Glencar Shopping Centre, then put the snake in a pillow case next to a heater. It was soon slithering around as normal and appears to be fully recovered and getting ready to shed it skin.
“It must have escaped from somewhere as it is only a young snake about six months old,” she added.
She hopes the owner will come forward. Alcorn’s Tropical World in Letterkenny have volunteered to care for the reptile if no one claims it.