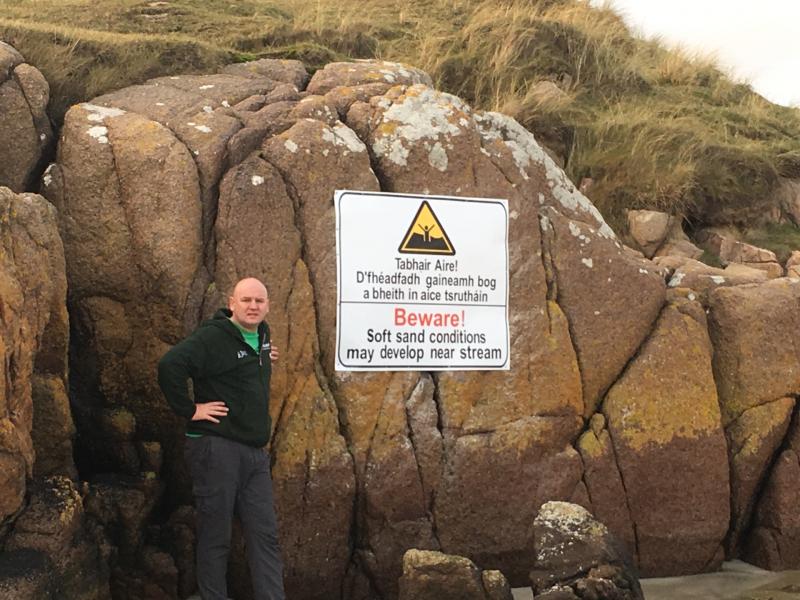 Donegal County Council has erected warning signs at a well-known Donegal beach after a young boy sank up to his waist in soft sand.
The boy’s mother, a local woman, came to his help after he sank in the sand close to a stream at Carrickfinn beach.
She sank to her thighs in helping her son and had to use a rock to free herself after helping her son out.
The signs were erected at the beach on Monday after the incident at the weekend.
Cllr Michael Cholm Mac Giolla Easbuig contacted the council after hearing about the incident.

'Beach is safe'
He urged people not to be discouraged from visiting the beach, a well-known beauty spot close to Carrickfinn airport, despite the incident.
“This affects just a small section of the beach,” he said.
“The beach is safe and I would encourage people to come and use it because at the end of the day the beach is one of the most beautiful sights in the world to fly into.
“A lot of people flock to it and a lot of people who are home at Christmas and New Year come there and it is extremely busy.”
He thanked Donegal County Council and the local company Better Letter Signs for responding swiftly.
“This is something that has been there for years and people are aware of it. There were signs erected about two years ago but they disappeared.
“I contacted the council straight away and they moved very quickly. I would especially like to thank Better Letter Signs, who made the signs and erected them, for their very quick response on request.
“We’ll go back when people return from holidays and assess it and look at the signs and see that they are doing what they are supposed to.
“But the beach is beautiful and the beach is safe.”