'If love could have saved Paul - he would have lived forever'

Paul 'Diddler' Dillon is laid to rest in Newtowncunningham 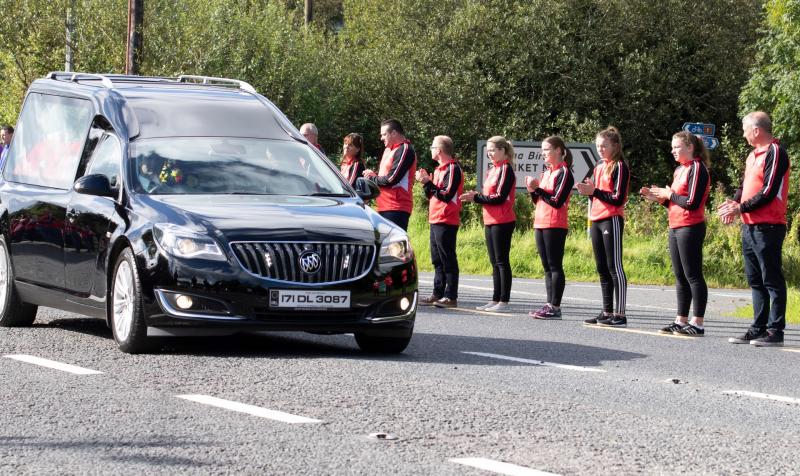 The words of  'You'll never walk Alone' ignited thunderous applause among mourners as the coffin of Paul 'Diddler' Dillon was guided through the chapel doors and towards his final resting place in Newtowncunningham this afternoon.

Paul 'Diddler' Dillon, 45, a loving father-of-three passed away after a short battle with illness, on Thursday, last.

As Mass began, Paul's brother, Barry told the hundreds of mourners gathered that Paul was more than one in a million.

Barry said that it would take a week to write a eulogy that would truly encapsulate the essence of Diddler.

"Diddler had many friends, he got on with everybody, no matter what their age. He was the life and soul of many social gatherings, whether it was the start of the 'chainsaw' or riding in on his motorbike or riding out on his horse."

Many who knew Diddler know that he was excellent at impersonating the sound of a working chainsaw. Diddler was very talented and was also well known for singing 'The Gambler' and 'The Transit Van.'

Loves of his life

Barry said that life changed for Diddler when a young girl plucked up the courage to ask him to the school prom: "Little did Paul know by saying yes that he would meet the love of his life and go on to marry her."

The congregation heard that Paul loved and adored Emma and that she had been the centre of his universe and when his three beautiful daughters came along, Lilly, Heidi and Daisy, his life felt complete, he felt 'that he had it all.'

"Anyone who knew Paul would see the pride and love he had for his three girls," Barry said.

Paul was a central figure in the community. He worked in Kernans Eurospar in Newtowncunningham and he loved to spend time talking and enjoying the company of those who would visit the shop. He was also known to have enjoyed playing pranks on his co-workers in the busy roadside shop. "For many people Diddler was the heart of Kernans," Barry said.

An avid Liverpool fan, his support of the team never wavered - even during bad times.

Paul was a true sportsman, he shared many sporting activities which included running for Lifford-Strabane AC, playing gaelic football with Naomh Colmcille and starring for local soccer side, Kildrum Tigers. He gave great encouragement and support to those around him.

During his illness, friends rallied for fundraising efforts to help adapt his home to his new conditions. The 45-year-old was always positive and upbeat which won him much admiration.

Barry said that following the 'devastating news,' of the diagnosis, that Diddler received in January - he inspired people with his courage, spirit and dignity.

"If love could have saved Paul - he would have lived forever.'

Quoting the words of 'You'll never walk alone' Father Ciaran Harkin said he could see a number of Man United fans shifting uneasily in the seats in front of him.

Fr Harkin outlined the importance of the song. It was written in 1945 and was initially recorded by the great Frank Sinatra. The song has many connotations however it was a song that was written for families who were suffering as a result of the ongoing war.

"It was a song written with purpose during those last months of world war two. It was written for the suffering families who had lost their loved ones - killed in action. A song recognising the darkness, the fears, the emptying of dreams but also a song of hope - a song looking to a brighter future - a song that emphasises that the sufferings of life, the darkness, it can be overcome if we walk together with hope in our hearts," he said.

Fr Harkin said that despite the fear and darkness of recent times those close to Diddler walked alongside him.

He commended the community for the overwhelming support they gave Diddler and his family during recent times. He said that Diddler gave himself to the community in so many ways and enriched the lives of so many in the community during his short lifetime.

Hundreds of people gathered to say their final farewell to Diddler on Sunday afternoon. Parked cars could be seen lining both sides of the roads that lead to the community chapel.

Fr Harkin said: "This Sunday Autumn afternoon, with heavy hearts, we present this man, Diddler, back to God. We have had the privilege of having Diddler among us. He enriched greatly the life of this community, we wish it could have been much longer," Fr Harkin said.

The congregation spilled out under a cloud-filled sky. Together the words 'walk on, walk on with hope in your heart, and you'll never walk alone,' fell from their lips in unison as they brought a much-loved father, husband, son, brother and dear friend to his final resting place.