Second leg is at Finn Park on Friday 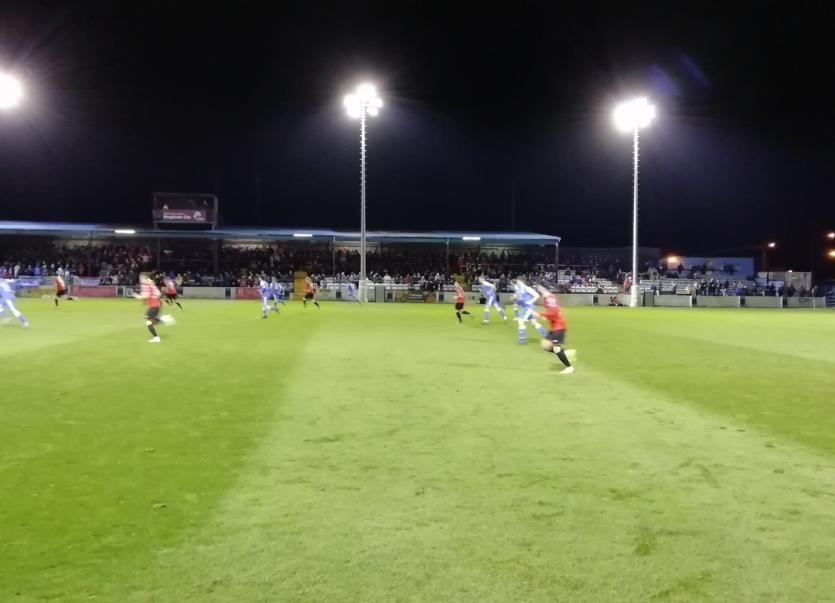 Finn Harps have it all to do in the SSE Airtricity League Promotion/Relegation Play-Off following the first leg at United Park.

Man-of-the-match Chris Lyons left it late before pouncing in the 93rd minute to give Drogheda United victory in a closely fought game at United Park.

So Harps will have to overcome the deficit in the second-leg on Friday if they are to be playing Premier Division soccer next season.

But it really was a case of so near and yet so far for Harps.

Moments before the match-winning goal substitute Mikey Place could have put Harps ahead while after the goal, another substitute, Raffaele Cretaro hit the post.

Drogheda went onto the game brimming with confidence having overcome Cabinteely 5-1 on Friday to win 6-2 on aggregate in the First Division play-off to set-up this clash with the Donegal side.

Harps made nine changes from the starting line-up from the 4-0 defeat against Derry in their final league game - which was essentially only of academic importance. Keith Cowan and Tony McNamee both got the nod to face the Louth side.

The game started with an early chance falling to Keith Cowan as Harps had the better of things.

However, Drogheda then began to settle and Mark Anthony McGinley was forced into making a decent save to thwart Lyons who connected well with a measured cross from Adan Wixted.

And McGinley was then forced to go full length to tip over a fine shot from the lively Lyons at the expense of a corner on 19 minutes.

At the other end Harps threatened on 25 minutes when the industrious McNamee provided a wicked cross for the in-rushing Nathan Boyle. He got there in time but could not find the target from just a couple for yards out - but potential blushes were spared as a flag had been raised for off-side.

Drogheda opted to play out from the back on many occasions, and at times this was a potentially dangerous ploy.

As the game edged towards the break, Harps appeared to be getting on top again. Boyle had a shot block and Drogheda had to defend stoutly.

The chief talking point in the early stages of the second half was the dismissal of Harps boss Ollie Horgan, after a sideline dispute with referee Rob Hennessy as Harps’ Harry Ascroft had to come off the pitch to change his shorts!

Prior to that McGinley had again been in action as he stopped a Mark Doyle header without difficulty while Sean Brennan struck a long-range free wide of the target.

On 70 minutes, Drogheda had a great chance to break the deadlock when substitute Meaney got onto the end of a dropping ball but blasted wide from 12 yards.

The final quarter became quite scrappy and understandably there was caution exercised by both teams.

But the final five minutes produced plenty of drama.

Place almost put Harps ahead before Drogheda then struck in the third minute of stoppage time through Lyons who gave McGinley little chance with a fine finish for the home side to put them in the driving seat for the second-leg.

After that Harps could have salvaged a draw but Cretaro's effort hit the woodwork.

The second-leg takes places on Friday at Finn Park with a 7.45 pm kick-off. Extra-time and penalties will be played if necessary.