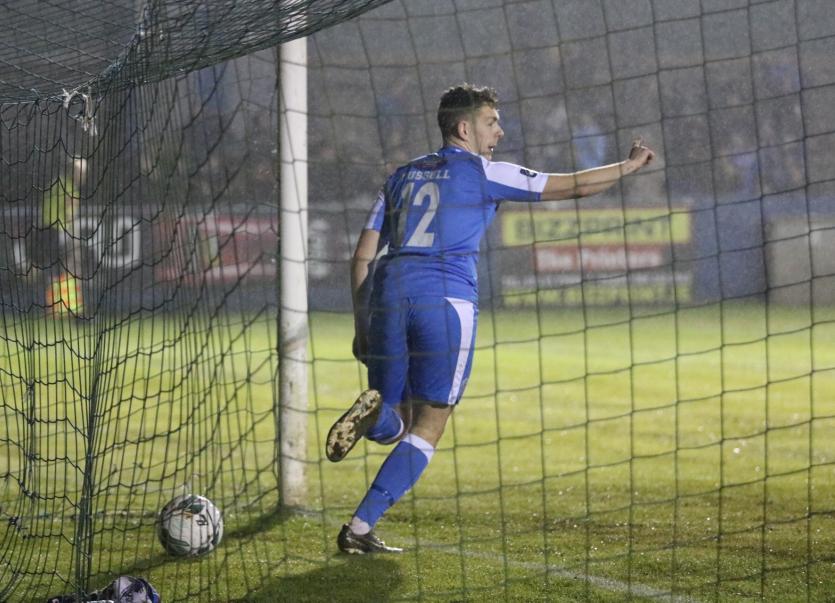 Mark Russell wheels away in delight after scoring for Finn Harps in the first half. Photo: Stephen Doherty.

Finn Harps have done it - they will be playing in the SSE Airtricity League Premier Division again next season.

Finn Harps will play in the Premier Division next season after coming out on top in an absorbing promotion/relegation play-off final second-leg mud-battle at Finn Park, Ballybofey.

Not since 2013 has a Premier Division side won this make-or-break play-off, but Ollie Horgan’s side triumphed thanks to goals from Mark Russell in the first half and an extra-time match-winner from Harry Ascroft to spark of scenes of delight from the majority in the 2,113 attendance.

This was Harps’ third promotion/relegation play-off decider since Horgan took charge back in 2013 – and his third success.

For Harps this was very much in the ‘Great Escape’ category, and the celebrations were understandable.

It took them 16 matches before they won their first Premier Division game of the season.

And they came from eight points behind UCD – who finished bottom and who were automatically relegated – to finish nine points above the Belfield side and clinch their spot in the play-offs.

But spare a thought for battling Drogheda who must now face First Division football again next season.

The Louth side who went into the game with a 1-0 lead from the first-leg at United Park on Monday, were a goal down at the break as Harps were much the better team in the first-half..

The attack minded Donegal side began positively and went ahead on seven minutes when following a short corner veteran Raffaele Cretaro found Ruairi Harkin outside the box and his teasing ball in was met by the Mark Russell who climbed above the Drogheda defence to head powerfully beyond the reach of Luca Gratzer.

And on 19 minutes Russell almost got a second as, unmarked, he sent a looping header, from a corner, just past the upright.

The home side had the better of things for the rest of the half, with the inspirational Ruairi Harkin’s probing crosses causing Drogheda a couple of problems.

Indeed, Harps went within inches of doubling their tally in the 39th minute when Sam Todd met a Timlin corner only to see his effort fly just over the upright.

Moments later Ascroft attempted a spectacular overhead kick but having done the hard part, the shot lacked force and was capably collected by Gratzer.

Drogheda’s first real chance did not materialise until the 64th when Mark Doyle’s shot was smartly saved by Mark Anthony McGinley.

The final 20 minutes was nerve-wracking stuff with players, slipping and sliding on a muddy pitch plucked from the 70s.

Twice in the final six minutes, Mark Doyle had chances for Drogheda but on both occasions McGinley was well placed to make the saves.

The first half of extra-time so no real clear-cut chances as the players grappled with the conditions.

But at the start of the second half, Harps  got the all-important second goal as Harry Ascroft got onto the end of a Tony McNamee corner to score from close range.

Drogheda had some late chances but Harps held on.

So Harps will play in the top flight of Irish soccer again in 2020 while Drogheda will once again be in Division One.