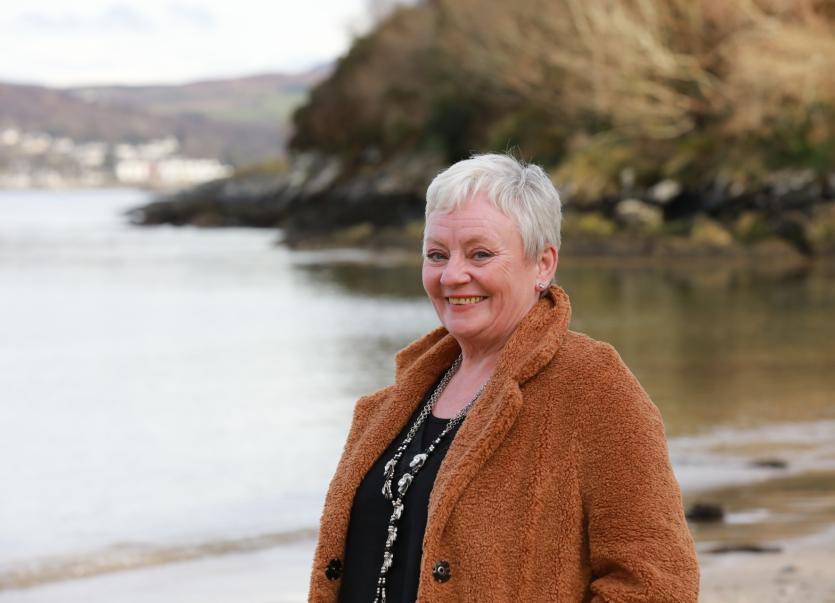 Rosaline Callaghan, who lost her aunt, father and cousin, all three of whom were from the Inishowen village of Burt, to Amyloidosis, is now part of the rapidly expanding All Ireland ATTR Amyloidosis Awareness organisation.

The group was due to host an event in An Grianán Hotel in Burt this month but it was postponed due to the current Covid-19 restrictions.

Amyloidosis is also known as ‘Donegal Amy’, due to its prevalence along a 15 mile stretch of coastline between Carrigart and Burtonport.

It is caused by the build-up of an abnormal protein in the body’s tissues and organs, which affects their shape and function and can lead to organ failure.

Speaking to Inish Times, former barrister, Rosaline, said: “We would like to thank everyone who has supported our group so far which now numbers 164 people, patients, carers and surviving family members of loved ones lost to Attr Amyloidosis.

“We have much work to do, both in Northern Ireland and South of Ireland to support each other, raise awareness, campaign for easy access to genetic testing and, more importantly, speedy access to the proper medication to prolong life and improve the quality of life for people stricken with this progressive and, ultimately, fatal disease.

“I am grateful to be receiving the gene-silencing drug, Patisiran. It is available to me as I live in the North and I am to receive my fifth infusion on Thursday. It is a treatment and not a 'cure' and comes with its own set of challenges but these are inconsequential in the face of full-blown Hereditary Amyloidosis.

“It is not available in ROI where there are approximately 20 people who would be candidates for Patisiran if it were available. One man, in particular, is in dire straits with the illness and we are frustrated beyond words that he cannot have access to a drug which would halt the progression and improve his quality of life,” said Rosaline.

Patisiran is available in the UK, all of western Europe, USA and other countries but not Ireland.

Rosaline said this was “ironic” as the third most common mutation of the disease, T60A, has its origins in a 15-mile ribbon of coastline in North West Donegal.

Rosaline added: “Patisiran has been available in the UK, for example, since September 2019. It would appear the systems in place in ROI for the approval of reimbursement for new drugs is ludicrously cumbersome, time-wasting and not transparent.

“The timeline was as follows: December 2018: Alnylam, the company who makes Patisiran, made contact with the HSE, informing them about Patisiran and their intention to seek reimbursement. February 2019: an Initial scoping meeting was held with the NCPE (National Centre for Pharmaco- Economics) for a Health Technology Assessment. June 2019: Alnylam submits the dossier for the Health Technology Assessment to NCPE. NCPE has three months to review but they can 'stop the clock' by asking for more information which they did, and with which we don’t have a complaint, but there is a significant delay on the part of HSE in restarting that clock.

“It was not until February 2020, some eight months later, that NCPE made the decision that Patisiran was not cost-effective against existing treatments. This is arguably a sleight of hand. The reality is that there were, and are, no existing treatments with which to make a comparison. The 'existing treatments' to which they refer are medicines to deal with the individual symptoms of ATTR Amyloidosis, which are old generic drugs such as Paracetamol for headaches and Lasix, a diuretic used as part of the treatment for heart failure for patients with cardiomyopathy,” said Rosaline.

When a drug is not recommended due to cost effectiveness concerns, the treatment goes for the next level of review by the Corporate Pharmaceutical Union (CPU), within the HSE.

Discussions are then organised for negotiations about pricing.

Rosaline said: “This situation is not unique to Patisiran. At the end of March 2020, CPU contacted Alnylam to arrange a meeting date . Two separate dates for this meeting were cancelled in light of Covid-19.

“On May 25, 2020, CPU and Alnylam held an online meeting. We contacted Alnylam for an update on the position and have been told the details of the negotiations are confidential but that they offered 'a significant price reduction and a generous package' to HSE.

“This is where we go into a really black hole. In late August, the CPU informed Alnylam that the Patisiran application was to go to the Rare Diseases Treatment Review Committee (RDTRC) for an additional layer of review. The RDTRC was set up in 2018. We understand it has met only five times between 2018 and 2019.

“Professor Michael Barry, who is Clinical Lead of the NCPE was the Chair of RDTRC. Professor Barry stepped down as Chair of RDTRC in March 2019. He was not replaced until July 2020, by Dr Jerome Coffey, a staggering 16 months later. We remain in the black hole,” said Rosaline.

Professor Julian Gillmore of the National Amyloidosis Centre at the Royal Free Hospital London has stated that “Patisiran is a game-changer. What was once a progressive and fatal disease is now a manageable, chronic condition.”

In the meantime, Rosaline said, Irish people, who are candidates for Patisiran, are not getting the treatment they need.

Rosaline confirmed that not one patient has been invited to make representations to the RDTRC to advocate for the drug or to describe the physical, emotional and economic burden of living with the disease on both the patient and the carer.

She said: “We have forwarded a group letter to the CPU this week and await a response. Alnylam has confirmed they have expedited all that has been requested of them and shall continue to do so.

“We call on Mr Stephen Donnelly, the Health Minister, to comment.