‘We will not go away until we receive equality, justice and 100% redress’ 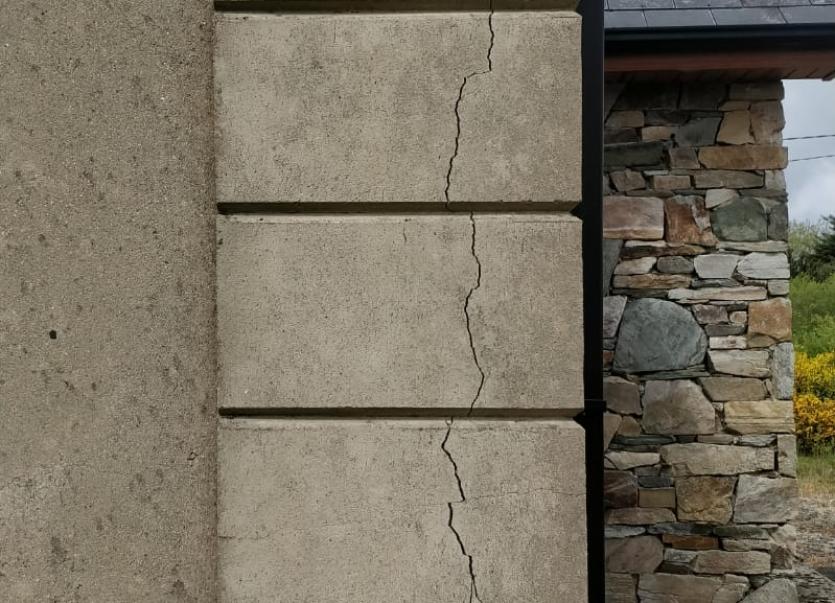 ‘We will not go away until we receive equality, justice and 100% redress’

“You are constantly wondering if there are going to be any more cracks. Every little noise you hear, you think, ‘Yeah, there’s another crack coming now’ and you wonder how much longer you have left in the house.”

The Clonmany mica-affected homeowner spoke out about the disparity between the Pyrite Remediation Scheme and the Defective Concrete Blocks Grant Scheme, better known as the Mica Redress Scheme.

Paul said: “No-one was happy with the with the Mica Redress Scheme. People were just so disillusioned with the whole process. It had got to the situation where they thought, ‘What is the point?’

“People needed a break from it as well. It had been mica, mica, mica for the past 10 years for people and they were sick of it. I had a conversation with Denise [Paul’s partner] last night and she said she resented even having to talk about mica anymore.

“It dominates. If it’s in your house, it dominates your life, it dominates your thoughts at night and in the morning. You are constantly wondering if there are going to be any more cracks and every little noise you hear, you think, ‘Yeah, there is another crack coming now’ and you wonder how much longer you have left in the house.”

Paul said his position regarding the Mica Redress Scheme is still the same.

“Our home has six feet deep foundations. It will be an entire rebuild without question. We couldn’t find what could be €100,000. It’s just out of the question.”

Paul said he was struck by the demographic who attended the recent 100% Redress demonstration in Buncrana.

“I realised that myself and Denise were at the younger end of the people affected by Mica. Just looking around the crowd, there were people there aged 40, 50, 55. That was the predominant age group.

“People who have raised families, put children through education, possibly third level education. They are heading into a period of their lives when the money they are earning should be being put towards their retirements. However, instead, they are being asked to put this money into fixing a problem they didn’t cause. The injustice of that really hit home to me.

“We personally can’t move on. We are stuck in limbo. It is a waking nightmare. It is extremely tough to make any meaningful long-term plan when you have an issue like mica hanging over you.

“We have all waited too long and we have been put under too much stress and pressure. This cannot continue to dominate our lives for another 10 years. So, the Government has to act fast and the time for talking is well and truly over,” asserted Paul Finucane.

Paul said he had received “good communications and support” from Donegal’s three opposition TDs, as well as a couple of TDs from outside the county.

He added: “However, I feel the politicians in power, who are really only in power by default, simply don’t care enough to listen, as was shown by the recent comments of one Oireachtas member. They are tragically out of touch with what is really happening to families with mica. They think differently from us and for them the political party will always come first, and their own people will come second.

“It was clear the Defective Concrete Blocks Grant Scheme was always a bad one. It was always unfit for purpose and it was always designed to discriminate. So the question has to be, why were the Fianna Fáil and Fine Gael TDs, who were in power and who are still in power, not shouting from the rooftops and fighting tooth and nail for us when the Scheme was announced?

“They abandoned us when we needed them the most. They sat back and did nothing, and we are now to believe that Fine Gael and Fianna Fáil TDs didn’t know of the Scheme’s unworkability, even after myself and countless others wrote to them on numerous occasions telling them in plain English, how and why our families did not avail of the Scheme.

“We have all told them that we are under increasing pressure. Our houses are getting worse day by day. And we told them, thousands will end up homeless. I didn’t even get an acknowledgement from them. And we are now supposed to believe these people have our best interests at heart and will fight for us. It’s baffling to me,” said Paul Finucane.

Paul is convinced it will be the collective effort of the Donegal and Mayo people which will get “the scheme we deserve”.

He said: “We can be under no illusion and make no mistake about it, when we do get the scheme we deserve, if we do get parity with Pyrite, if we are treated equally, it will be down to the efforts of the people of Donegal and Mayo who stood up and made themselves heard.

“If it were not for the likes of Paddy Diver and the thousands of people who took to the streets, Minister McConalogue and Joe McHugh would still have their fingers stuck firmly in their ears.

“Ineffectual TDs who do not fight for the people who elected them is how you end up with TDs like the Healey-Rae’s. People want somebody on their side. They want somebody to fight with them and for them. Not someone who will ignore them, tell them to make do, sit on their hands until it looks like the issue affects them personally.

“Those TDs made no effort until it looked like people were going to be canvassing and voting against them at the next election,” said Paul Finucane.

Paul said he felt the mica scandal would end in one of two ways.

He explained: “The first one is, the Government will let the homes fall down and see thousands made homeless. The second option is the Government does the right thing and treats us with the same respect as those who were involved in the Pyrite Remediation Scheme.

“But the second option will only happen if we get support from the wider public and we need massive support to get 100% Redress. We need homeowners and families who do not have mica to stand with and take to the street alongside their neighbours who do have mica.

“It is only be sheer luck that they are not in the same position as we found ourselves in and, who knows, they might discover mica before long. No-one knows the true extent of the mica problem.

“We need every single person who can get to Dublin on June 15 to go and let the Government know it can no longer ignore Donegal and hope we go away. Every single last man, woman, and child matters. This is everything to us and we will not go away until we receive equality, justice and 100% redress. We will not accept anything less than parity with pyrite,” said Paul Finucane.