DIARMAID DOHERTY speaks to Chloe Magee and hears how she's dealing with time away from the court, now that life for us all has been put on hold 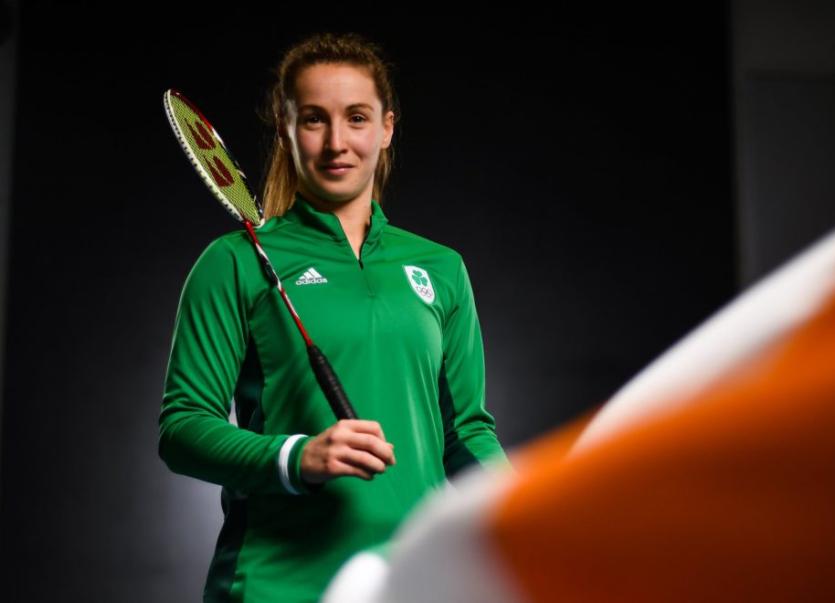 There were still around three months of competition left for Chloe and Sam Magee as their bid to qualify for the Tokyo Olympic Games ramped up a gear.
Three months, and the best part of ten tournaments to achieve the points needed to grab one of the coveted spots in the mixed doubles competition.
But then life suddenly changed for us all, and the sport of badminton, like all other sports across the world, had some big decisions to make.

Interest
Chloe Magee watched with interest as the Badminton World Federation (BWF) appeared to first dally and then dither before eventually cancelling all competitions at all levels of the game.
Strangely, they had allowed the All England Championships to go ahead in Birmingham on the week before St. Patrick’s Day. The five days of competition, which served up 155 matches attracting the best players in the sport from all over the world, was watched by huge crowds.
There were tournaments cancelled before the All Englands and not surprisingly, Chloe admits to feeling uneasy at the fact the event got the go-ahead.
“It shouldn’t really have taken place when you think about it now,” Chloe said.
“This tournament is probably the biggest and best in the world. The best players come from all over. At other tournaments, you’ll get a few hundred spectators, but this event always draws big crowds, so it’s a massive competition.”
Chloe and Sam Magee competed, but were unfortunate to be drawn against Hong Kong’s No. 1 seeds in the first round and lost out in straight sets. The Magees played well and Chloe said they were happy with their performance against a Hong Kong pair who went on to reach the quarter-finals.
“You’re talking about the top 32 pairs in the world taking part in the All Englands. We were there and we did well,” she said.
Competing in the tournament was part of a schedule which was geared towards their qualification for Tokyo 2020.

Other tournaments
There were other tournaments up ahead - and that meant a chance for the Raphoe brother and sister to pick up the points they needed to achieve qualification.
“We weren’t taking qualification for granted,” Chloe pointed out.
“It wasn’t going to be easy. There were only around 16 places up for grabs (at Tokyo) and one of those places was for Canada, one for Oceania and one for Africa, so that left only 13.
“So we weren’t there yet.”
But with the coronavirus pandemic taking a grip all over the world, suddenly there were more important issues of concern.
And by the end of March, the decision was taken to postpone the Olympics until 2021.
“It was probably no real surprise,” Chloe said.
“We sort of heard ourselves that they would be making a decision on Tokyo. They had to really.
“What we don’t know is what they’re going to do about qualification.
“The entire thing is up in the air now. They might get back playing again in a few months, and start qualification again. I’m not sure. It’s just a case of wait and see.”
The uncertainty isn’t ideal for Chloe or Sam, but Chloe is quick to note that there are far more important things to worry about at the present time.
She’s back in Donegal among family again, and like the rest of us, she’s following Government guidelines in order to stay safe and in good health.
“We were still training away in Dublin and Badminton Ireland were doing their best to have training for all the players,” she said.
“But for the last couple of weeks now, I’ve been back home in Donegal.
“It is strange, but what can you do? I’m someone who is used to training, and used to being on the court almost everyday. That’s been the way for me for so many years. But all of a sudden, you’re sitting at home and you can’t train.
“I suppose you’ve got to look at things differently now though. We’re all in the same boat, no matter who you are. Whether you are someone who’s involved in sport or not, you’ve got to follow the advice that’s there and stay safe and stay at home.”
On the plus side, Chloe is spending some precious time with her partner, the former Finn Harps defender Packie Mailey. At this time of the year, badminton would normally have her away from home, so every cloud . . . .

Disruption
But the disruption to her season, and the postponement of the Olympics has left her mulling over her immediate future. She had planned to retire after Tokyo - presuming herself and Sam achieved qualification.
“That was the intention. I made my mind up after Rio (2016 Olympics) that I’d give it one last go in the mixed doubles, qualify for the Olympics and retire after that.”
At 31, Chloe feels it would have been the right time to step away from the sport which has been her life since her teenage years.
That said, she’s still playing well and earlier this year, she was back making headlines at February’s Irish Nationals.
After the event, in which she won both the Women’s Singles and Mixed Doubles titles, Badminton Ireland officially recognised Chloe for holding the all-time record for National titles won - an amazing 26 in total.
She’s come a long way since winning her first titles in the Women’s Singles and Women’s Doubles back in 2007.
“I didn’t realise the significance of it all until after the event,” Chloe said.
“Yeh, it’s good going alright.”

On the world stage, she said of the three Olympics she has competed at, the games in London in 2012 were the best.
“The whole lead-up to that event was just brilliant. And the fact that my friends and family were able to be there too - it was all just so enjoyable.”
But she’s quick to point to the medals she has won at European level.
“I’d say those medals are probably a better achievement than competing at any Olympic Games,” she said.
Along with Sam, they picked up a bronze medal at the European Games in Baku in 2015 and then again in Minsk, Belarus last year.
“That was one of the high points of my career,” she said.
“It was a tough week of competition, but we played some brilliant stuff and to come back home with another bronze medal was fantastic.
“When I look back at all the good days on court, and all that I’ve achieved, I think those medals probably mean more to me than anything I’ve won.”