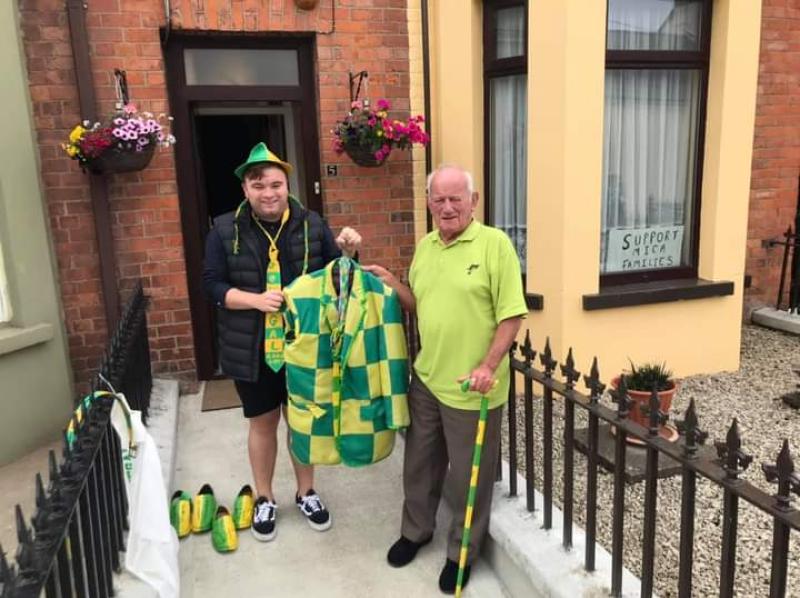 It has been some month for one month for “Mr Donegal”, Buncrana's own John Porter.

Over the years, John and his talismanic green and yellow suit became a regular fixture at Donegal matches and St Patrick's Day parades. John has now been gifted it to Adrian, his fellow CLG Bun Cranncha member and Buncrana Children's Charity Chairperson.

Speaking to Donegal Live, John recalled that he and Anna had met in London in the Emerald Dancehall in Hammersmith at Christmas 1969.

“At the time, I worked in construction and Anna worked in the Masonic Hospital in Shepherd's Bush,” John said.

“We were married in the Church of the Assumption, Bride Street, in Wexford, in 1971. The ceremony was performed by the late Fr Ned Murphy. Our wedding reception on their wedding day was held in the Talbot Hotel. 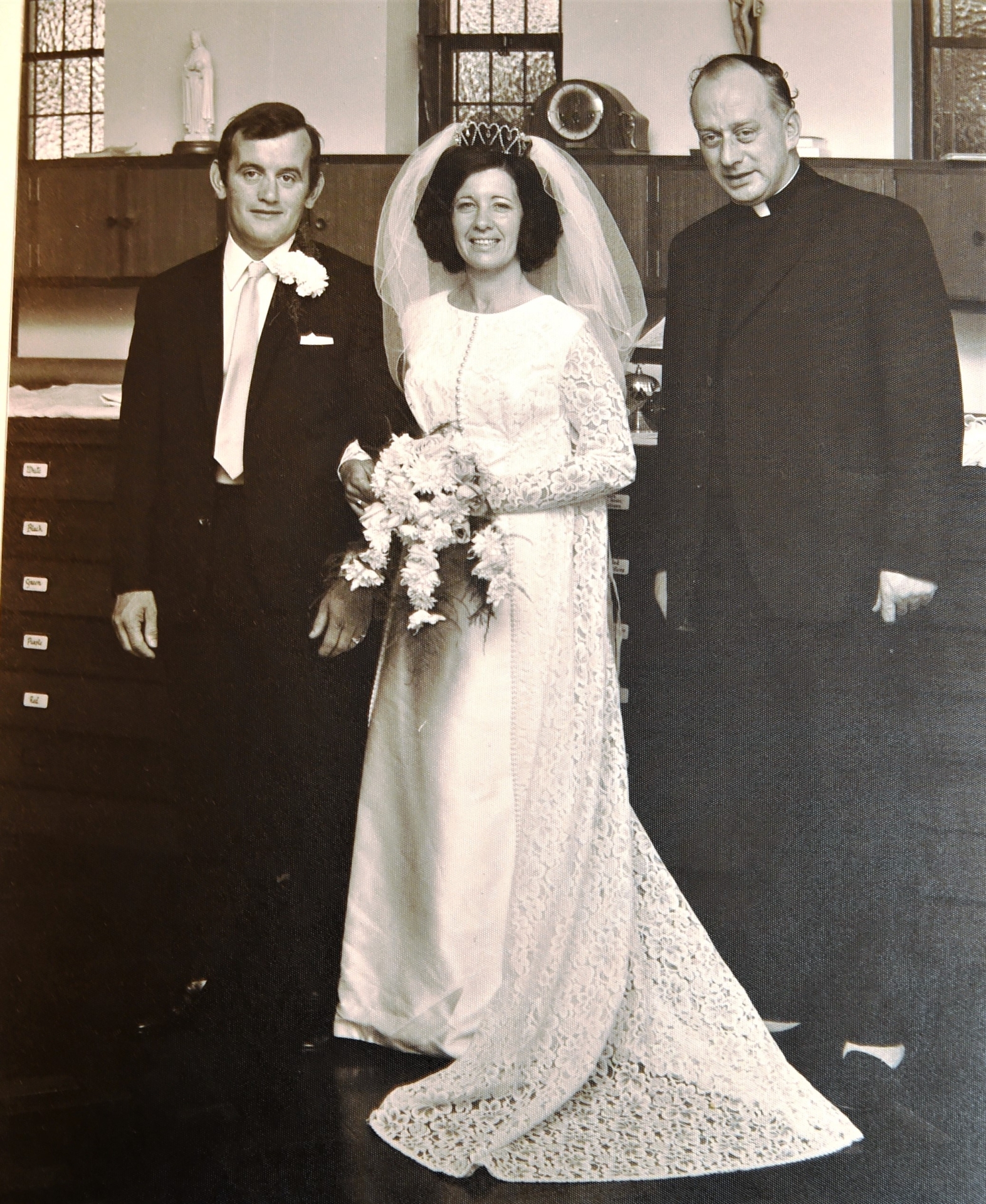 “We had planned was to return to that venue for our Golden Wedding anniversary celebrations, however, due to Covid restrictions that celebration had to be cancelled. But, we did go down to Wexford, where our daughters, Lisa and Catherine, had a Mass arranged in the Church of the Assumption, and they showed us the register where we had signed our names back in 1971. That was lovely to see.

“We then had a party down in Anna's sister's house. They put on a great show for us. We were not expecting anything. It was brilliant. Pints galore.

“Anna and I went back to London after we got married. I first went to England in 1962 and worked about the country for a while before coming back to London. That's when I met Anna. We came back here to Buncrana in 1982. At the time I was the foreman on the Richmond Centre in Derry, so it was a handy number for me. I was there for four years and then I went to Belfast to work. I then got a job in Fruit of the Loom in security and that was it. I was there until it closed,” said John. 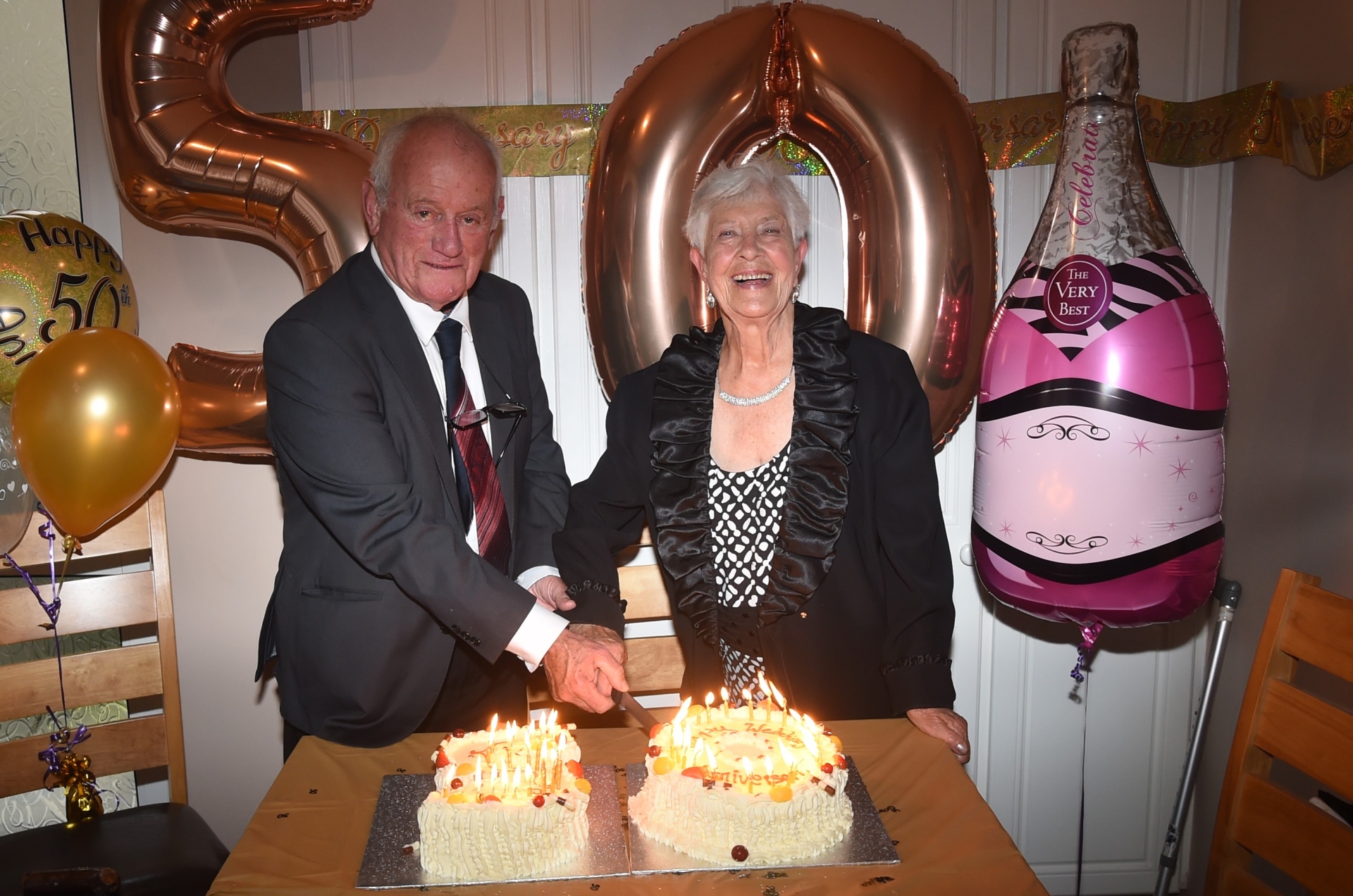 The first “Donegal suit” was the brainchild of the late Nicholas Maloney.

John explained: “God Rest Nicholas. Himself and myself got a pair of trousers each and a coat each and stuffed them with newspapers. Sadly, Nicholas died the year after Donegal won the All Ireland 1992. 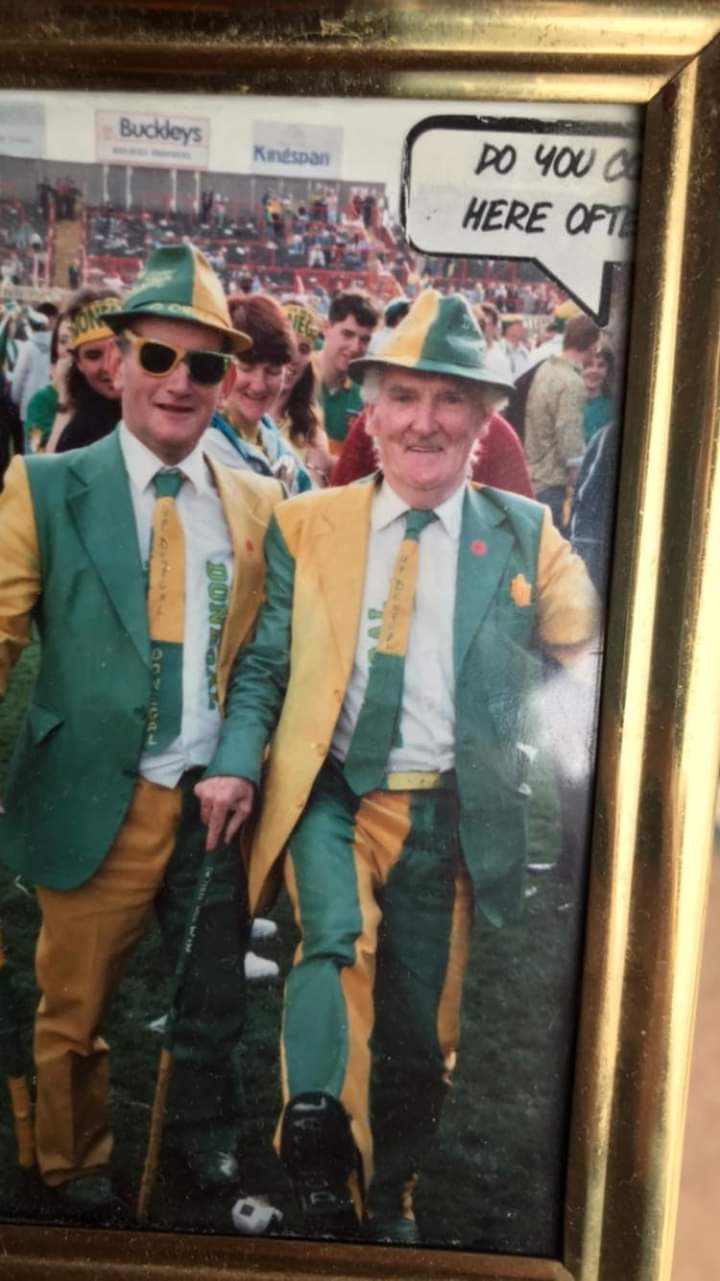 John and the late Nicholas Mahoney

“Nicholas was from Ennis in County Clare. He came up to Inishowen as a soldier to Fort Dunree and he met the wife and stayed. Nicholas came up with this idea of the suits, so we got emulsion paint and painted the suits. But, when it was a hot day, the smell of paint was overpowering.

“John Barr from the town then gave me eight flags, which I sewed on to the suit, which I am now handing on to young Adrian. That suit has been all over Ireland since.

“We were coming out of Croke Park one day and there was a Dublin man there with his son, with the real Dublin accent. 'Lads,' he said, 'I love the suits'. The next thing, about five or six weeks later, he phoned me and said, 'I want you up in Dublin. I have a photoshoot arranged for all the newspapers'. He had got a suit made, sponsored, a real suit, by Arnott's. And we have been friends since 1992. Dublin Gerry is his title. His name is Gerry Gowan and he lives up in Drumcondra. We phone each other at least twice a week. We are still friends. Sometimes we meet up at matches and have a bit of craic. I hope Adrian gets as much fun out of the suit as I did,” said John.

John rightly predicted Donegal's match against Tyrone would “not be easy”.

He also thanked everyone who gave Anna and himself donations instead of anniversary gifts.

He added: “We gave donations to the Donegal Cancer Bus and Suicide Ireland down in Wexford. Donations are still coming in.

“We also collected €272 in coins for the Cancer Bus, around Inishowen this week. Like all charities, the Cancer Bus has been badly hit by Covid-19. I would ask anyone with a little loose change to put it into one of our tins.”

Recalling Donegal's first All Ireland win in 1992, John said he and Nicholas were out celebration in Malahide until 1am, when “the craic was only beginning”.

“The next day,” he said, “we went into the Beaumont Pub in Dublin and the Dubs were singing away. When we went in, wearing the suits, the whole place fell silent.

“Then they all started singing, The Homes of Donegal. When we got up to the bar, we could not get buying a drink.

“I have lots of happy memories of wearing the Donegal suit. In fact, Buncrana were playing up in Killygordon recently and this woman stopped me and said, 'Are you John Porter? I have a photograph of you and I outside Croke Park and it has pride of place on my mantle piece,' she said.

“I don't know how she recognised me without the suit,” laughed John.