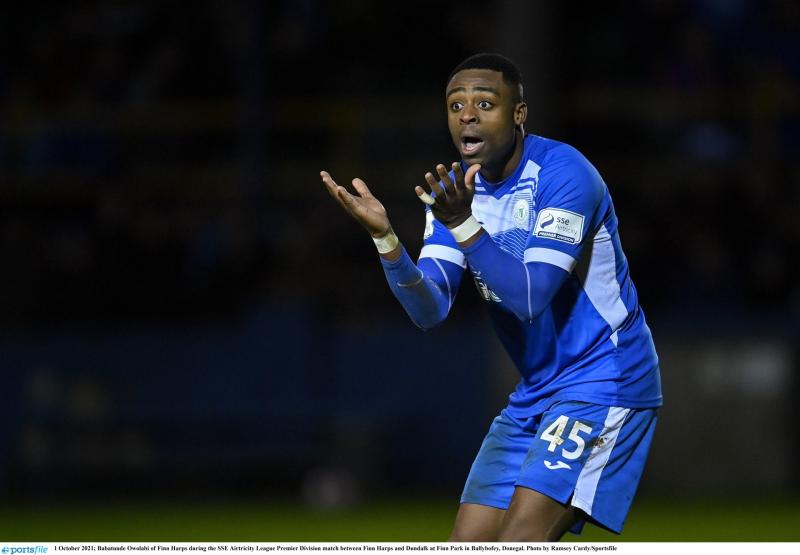 Tunde Owolabi scored twice as Finn Harps and Dundalk ended all square in a Premier Division match that might’ve gone either way.

In the end, everyone enjoyed their evening and headed off into the night rain happy enough with what they had, whilst optimistically claiming they might’ve got that little bit more.

Owolabi shot the hosts into the half-team lead only for Michael Duffy to level it with a stunning free-kick before Pat Hoban shot Dundalk into the lead from the penalty spot. Owolabi, though, grabbed his second of the evening and 10th of the season. 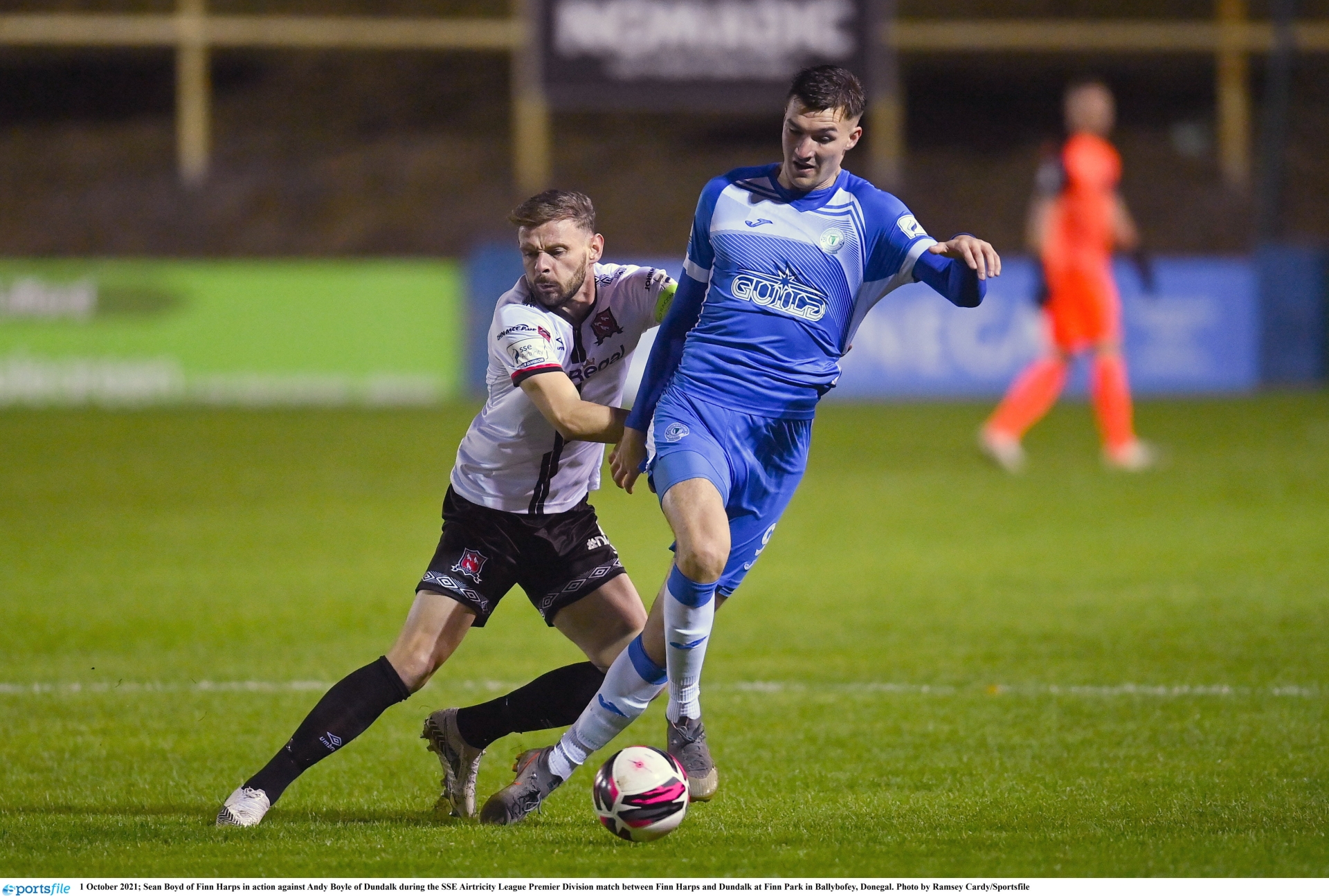 This was the sides’ third meeting in just 15 days with Dundalk coming through an FAI Cup quarter-final replay 3-1 in extra-time following a dramatic 3-3 draw at Finn Park beforehand.

With Dundalk on a run of form of late, winning their last three in all competitions, their impressive start created some anxiety among the home support in Ballybofey.

Harps got away with one when the ball struck the arm of Ryan Rainey in the penalty area and Hoban curled just wide. Then, an inswinging free from Duffy had no takers.

However, when the first goal did arrive it was against the run of play, although wonderfully taken by Owolabi. With his back to goal, the former FC United striker took a ball in from David Webster on his thigh before swivelling and shooting right-footed across the brows of Peter Cherrie from just inside the area on 19 minutes.

Right on the half-hour, Gerard Doherty - who maintained his place in the Harps goal despite Mark Anthony McGinley returning from suspension - got down to his right to save from Sean Murray and Harps managed to clear.

Sean Boyd scored three against Vinny Perth’s team in recent weeks and warmed Cherrie’s hands with a free-kick from the edge of the penalty area. From a Barry McNamee cross three minutes before the break, Owolabi, from close range, couldn’t keep his header down.

Ollie Horgan’s team were playing with confidence and the longer the half went on the better they got.

Dundalk knew they would have to get better and got back on terms courtesy of a fantastic goal from Duffy from a free-kick in the 61th minute, shooting across Doherty. 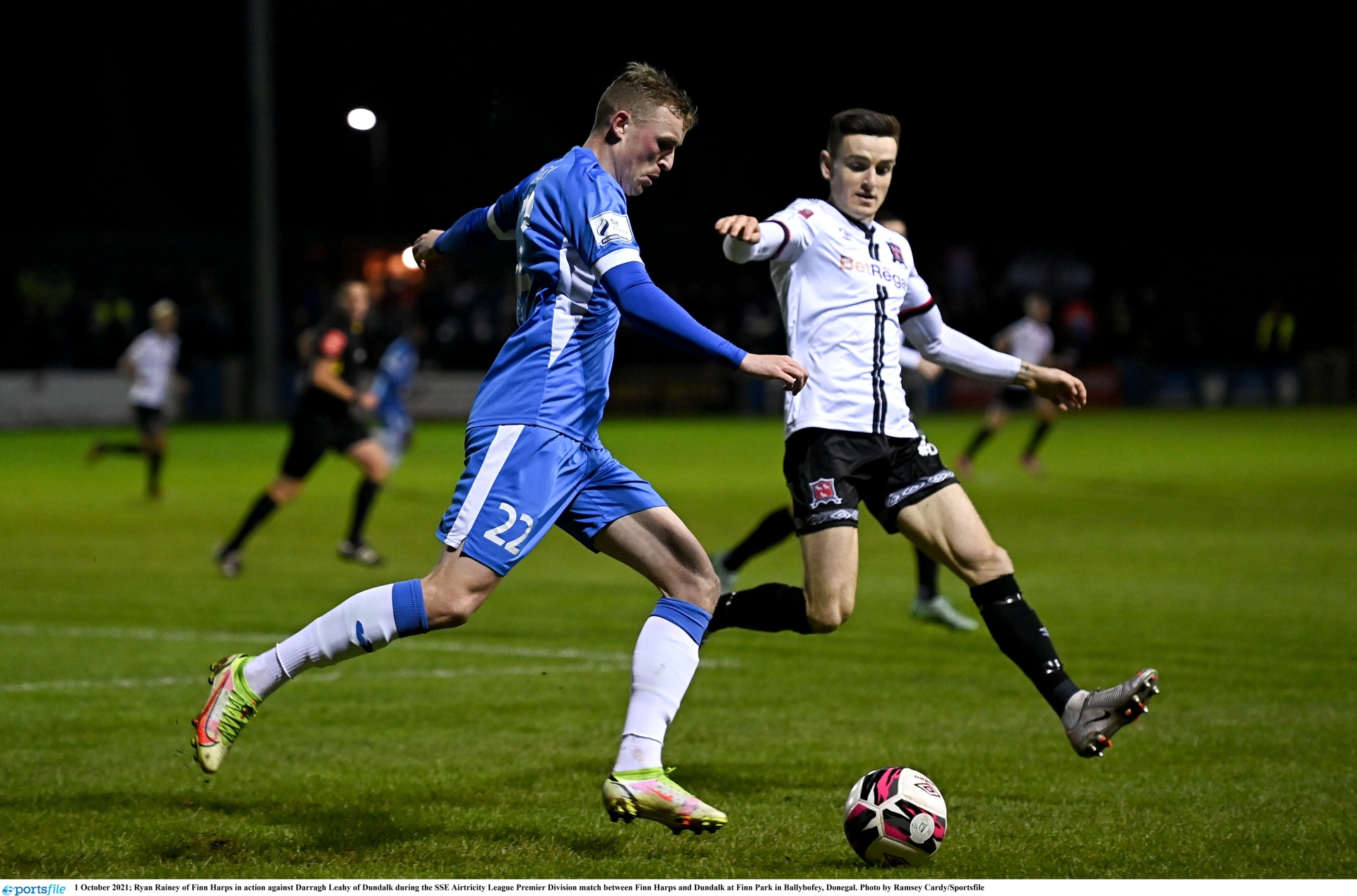 Harps, still licking their wounds, went behind 90 seconds later when Hoban, who was deemed to be fouled by Shane McEleney, scored from the spot for a 2-1 Dundalk lead.

As in the cup replay last Tuesday week, Doherty was beaten by a Hoban penalty and Duffy free-kick.

However on 69 minutes Harps were back on terms with Owolabi again on target, for his 10th league goal of the season. Breaking into space down the Harps left and on receipt of possession from Jordan Mustoe, he cut inside and drilled a piercing drive into the bottom corner to the delight of Town End.

From then on Harps looked the most likely with Cherrie - on his 38th birthday - saving at full stretch from Ethan Boyle and a McNamee narrowly off target. With their two-goal recovery in the initial cup meeting fresh in their heads, Harps were roared on at every opportunity.

They were silenced for a second with the final play of the match. Some 95 minutes in, Duffy’s delivery was headed inches wide by Sami Ben Amar, the Dundalk substitute. Everyone drew breath before Adriano Reale blew for time.