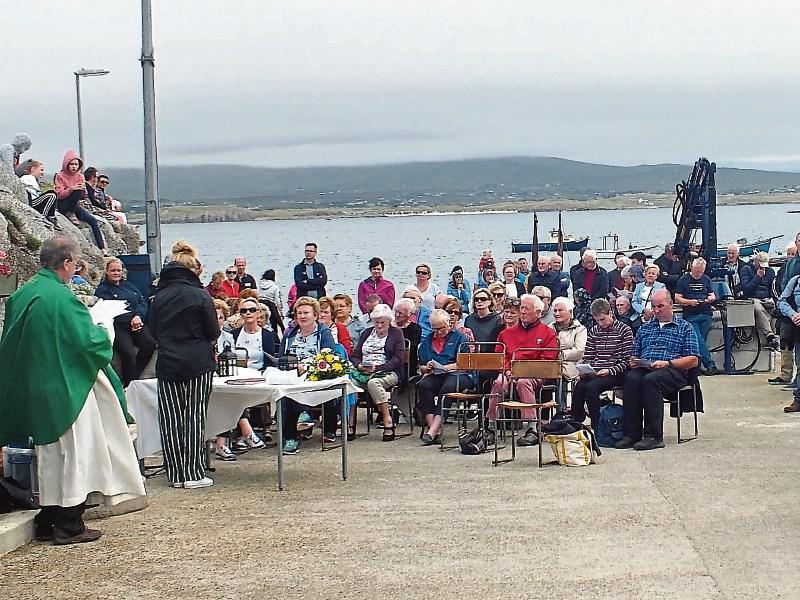 The scene on the island's pier

Around400 people travelled recently to Gola Island off the Gaoth Dobhair coastline for the Féile Ghabhla.

The ferry service, ‘Cricket’ which serves the island was operating flat out bringing people from the main land to the festival.

The Cricket skipper, Sabba Curran said it was the busiest year for him since he started the ferry service.

The festival was officially opened by Clíona Ní Ghallchóir, Meenacladdy who was recently crowned ‘Cailín Gaelach 2018’ at Comórtas Peile na Gaeltachta in Downings.

There was a historical walk with a guide and a sea journey around the island on the Cricket.

A number of events took place on Sunday including a Sean Nós dancing workshop and the staging of the drama, ‘Ostán an Asgard’ which was written by Eoghan Mac Giolla Bhríghde.

The Parish Priest of Gaoth Dobhair an Dr. Ró Oirmh. Pádraig Ó Baoighill made the trip to the island to celebrate mass under the grotto of the Virgin Mary at the pier.