Kilcar v Glenswilly: Champions are out after defeat in Towney 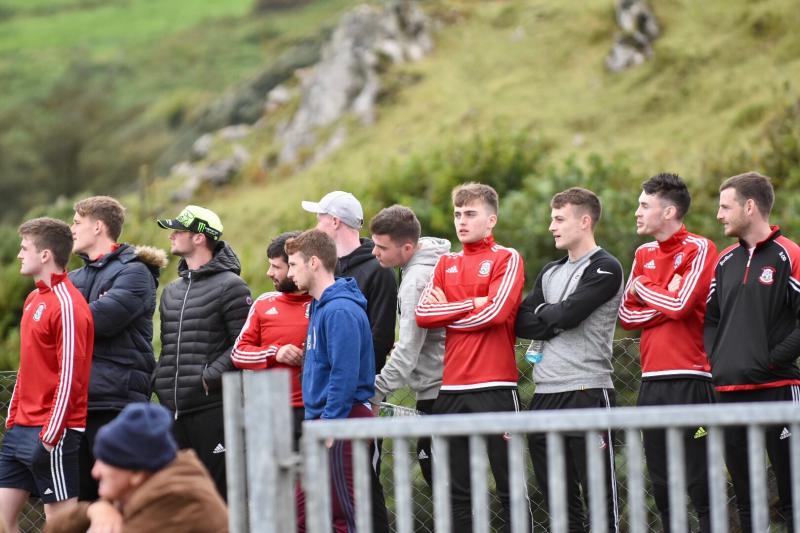 A section of the crowd watch the action in Towney on Sunday evening. Photo: Geraldine Diver.

There were ten yellows, two black and one red in Towney as Kilcar ended Glenswilly's interest in the senior championship on Sunday evening.

It was a tight affair but Kilcar got off to the perfect start and they never looked like losing. Indeed at times it looked as if Glenswilly were happy for damage limitation, but they did make a fight of it with a late goal.
Kilcar were out of the blocks like a greyhound. Ciaran McGinley won the throw-in and thundered through the Glenswilly defence and his goalbound effort was deflected over by Philip O'Donnell with less than ten seconds on the clock.
The second point came on 90 seconds, Conor Doherty setting up Ryan McHugh and his effort went just over also. There was 2.44 on the clock when Patrick McBrearty converted the third from a free, and McBrearty was wide off a post in the fourth minute.
Stephen McBrearty made it 0-4 with less than five on the clock. It was a whirlwind start.
Michael Murphy eventually got Glenswilly off the mark from a free on 14 minutes after Gary McFadden missed a free minutes earlier.
Matthew McClean replied from fully 50m. Michael Murphy (free) and Patrick McBrearty after Ryan McHugh was fouled, left it 0-6 to 0-2 after 20 minutes.
But then the scores seemed to dry up as Glenswilly played a possession game, at times going from midfield back to the 'keeper. On one occasion, the 'keeper was used three times. Points from Gary Copper McFadden and Oisin Crawford, both from distance, had the margin back to four, but again Matthew McClean stepped up for Kilcar.
Before half-time there were plenty of big hits with Michael Murphy bouncing off Patrick McBrearty and Ciaran McGinley in the same move and then bumping Conor McShane, but while Glenswilly had most of the ball, Kilcar tagged on two points before the break from Eoin McHugh and Patrick McBrearty (free) to lead by 0-9 to 0-4 at the break.
There were ten minutes on the clock before Patrick McBrearty fired over a free for the first score of the second half. And from the kick out he kicked another, his first from play.
Michael Murphy won and pointed a free at the other end. Kilcar had a goal chance after a great run from Ciaran McGinley but Eoin McHugh was denied by Eamonn Ward at the expense of a '45'. From the '45' Patrick McBrearty went short to brother Stephen and he fired over.
Matthew McClean added another and Patrick McBrearty forced a turnover and Eoin McHugh punished to stretch the lead to 0-14 to 0-5.
Glenswilly had points from Leon Kelly and Kealan McFadden and a Murphy fisted effort was just wide. They lost Leon Kelly to a black card after a tackle on Eamonn McGinley but Ciaran Gibbons cut the lead to six on 50 minutes.
Ryan McHugh had a point after a great Eoin McHugh run, but there was plenty of excitement in the final ten minutes as Glenswilly launched high ball after high ball. Michael Murphy pointed a free after Barry McGinley picked up a black card but then they got a goal after a scramble in the goalmouth with Christopher McMonagle getting the final touch.
The cards continued to flow with Oisin Crawford getting a second yellow for Glenswilly to finish with 14.
It was always going to be a tense affair, but Kilcar will be happy to have got over this hurdle and they will once again be the team to beat as the championship progresses.